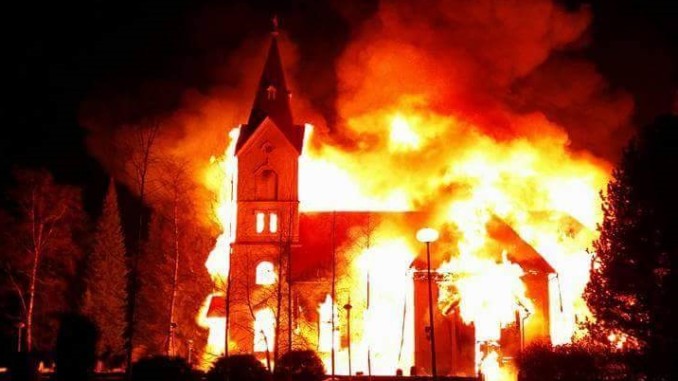 Today the band released a statement addressing the censorship it has received at the hands of social media services, including a defense of open speech especially for the provocative of all types:

From my theological and historical studies over the years, I have gathered a pattern that ideologues follow. These petty human struggles about identity and culture have been around since the beginning of time in different shades so that humans align themselves with either the left or right side of whatever political or religious camp is trending. So that they fight and divide each other for things that have nothing to do with their individuality on whoevers benefit.

This always prompted me to go back in time and look at a simpler and bolder time to which I can also look through the impersonal lens of time to see the similarities in which how people behave. I always seemed to find the identity politicians or social justice warriors to be the contemporaries of their religious fanatic counterparts of ancient times. They fulfill the same purpose anyway. Particularly in their self-contradictory totalitarianism in which they simultaneously preach peace while waging war, just like how nowadays ideologues preach freedom of expression and artistic freedom while ruthlessly censoring things they deem “problematic.”

As metal wakes from its long stupor, and finds itself in territory occupied by warring ideologues who see all art as a means to the end of their ideology, it is time for metal to fight for itself and see itself as an end worth asserting. Politics is the means to that end, so it can be subverted without loss to metal.

Peosphoros has a long uphill road ahead of them. Censorship on American social media is rife and will only get worse as ideological governments in the EU and US demand it filter out facts and opinions which go against the narrative that our liberal democracy desires.

However, with provocation — calling to mind not just G.G. Allin but Impaled Nazarene and Absurd — metal can fight back by inducing the ideologues to reveal their true nature, at which point their censorship “in our best interests” rings hollow.