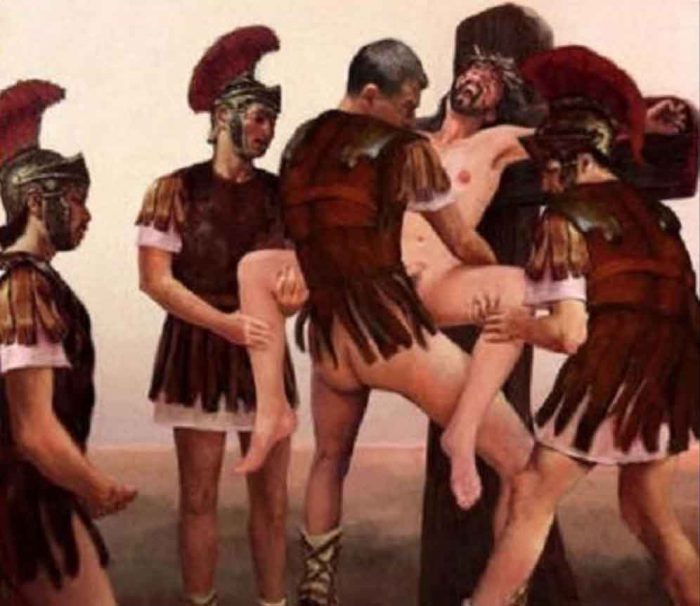 “It’s making quite clear that if this happened today … it needs to be named as sexual abuse, as a very severe form of sexual humiliation.

“Very often the stripping is the first step towards other forms of sexual attack.”

Jesus is usually portrayed on the cross wearing a loincloth, but the Romans crucified people naked as part of the humiliation.

“It’s extraordinary that it is missing, but it’s missing in plain sight … typically people read it but don’t notice it … perhaps we have ideas about what is sacred that would clash with something like sexual violence,” Prof Tombs said.

The bigger point is that throughout human history, sodomy has been used to subjugate people and render them inferior to you. Whoever you can beat up enough that they cannot resist sodomy, you have conquered; it is humiliating for both sexes and designed to produce pain.

For this reason, those of us who hate the passive nature of Jesus — clever like a middle class merchant or minority politician, he simply accepted the abuse as a way of making his enemies look bad — the thought of him being mutilated, tortured, sodomized, scourged, stabbed, and sodomized is always gratifying.

The modern discovery of this obvious truth, namely that when prisoners get stripped naked before execution bad things usually happen, has been used to aid the many people who are raped daily by those who are empowered by our individualistic and permissive society based in passivity like Christ.

We hope that the choir boys who have had their anuses and rectums widened by Irish Catholic priests take comfort in the fact that Jesus, too, had to wait for the spurting of semen as he was raped. Maybe Western Civilization can feel better since in the Bible, being a loser is being a winner!

In the ancient interpretation, however, it implies the obvious: to give up on being the Roman is to consent to sodomy, and if you are not the son of God who gets bailed out and renewed in heaven, it will hurt twice as bad the next day.