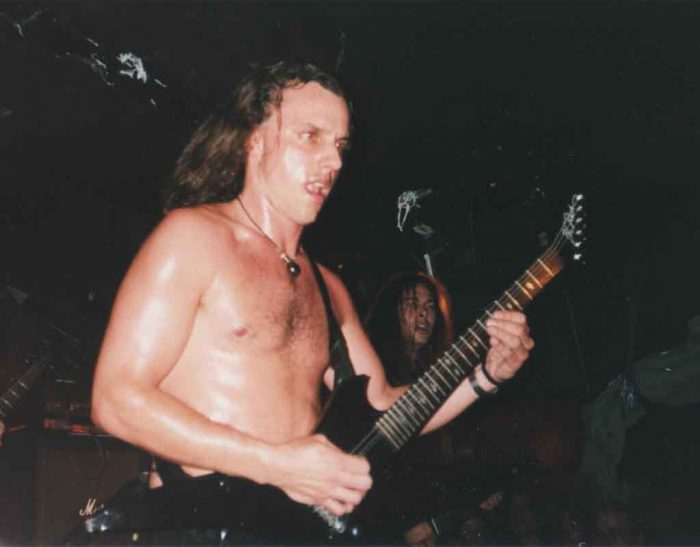 On December 13, we celebrated the twentieth anniversary of Chuck Schuldiner dying of AIDS. While early Death was some solidly good music and the band remained quality through Human, Chuck turned from the metal philosophy of nature-worship to a modernist ideal of humanism, and lost his soul in the process.

Deeply conflicted over what were apparently some promiscuous sexual urges, Schuldiner may have engaged in self-destructive behavior as well as the pursuit of destructive ideologies. About this time, the upside-down cross in the Death logo changed to be a Christian cross, or at least a neutral one.

These are not unrelated.

The man who wrote arguably one of the most passionate lyrics in defense of eugenics later came to believe that all people were valuable.

Creating a life only to destroy
Saved from a life of the unemployed
Where crime is the only way to survive
Which is the best to be dead or alive?
Maybe a chance but maybe not
Born to be thrown in the trash to rot
To exist in this world might be a mistake
The one who is with child, it’s their choice to make

Death and life taken so easily
Right or wrong, whose choice will it be?

Abortion, when it is needed
Execution, for those who deserve it
The giving and taking of life will always be
Altering the future

Saying “all people are valuable” is another way of saying “people do not have quality, therefore quality does not exist,” and that becomes a prophecy that shapes reality. It is a toxic, but passive, outlook, and this passivity infected all of what Chuck did after Human, leading up to his death from AIDS.

You can follow the background on Chuck dying of AIDS through the old ANUS article and a look into the mixed legacy of Death and Chuck Schuldiner.

It is worth mentioning here that pneumonia becomes the cause of death for many AIDS patients:

The spectrum of HIV-associated opportunistic pneumonias is broad and includes bacterial, mycobacterial, fungal, viral, and parasitic pneumonias. Bacterial pneumonia is the most frequent opportunistic pneumonia in the United States and Western Europe while tuberculosis (TB) is the dominant pathogen in sub-Saharan Africa. With the use of combination antiretroviral therapy and prophylaxis, the incidence of Pneumocystis pneumonia (PCP) has declined. Nevertheless, PCP continues to occur in persons who are unaware of their HIV infection, those who fail to access medical care, and those who fail to adhere to antiretroviral therapy or prophylaxis. Although pneumonias due to Cryptococcus neoformans, Histoplasma capsulatum, Coccidioides immitis, cytomegalovirus (CMV), and Toxoplasma gondii are less frequent, their presence in the lung is often indicative of disseminated disease and is associated with significant mortality.

Over the years, treatment of HIV-related pneumonia has become more advanced:

Legionella pneumophila infections appear to be uncommon in HIV-infected patients, while pneumonia with Streptococcus pneumoniae continues to occur with regularity, including infections with antibiotic-resistant isolates. Pneumocystis pneumonia occurs with a low incidence in patients receiving HAART, once the CD4 count increases to over 200 microl. Studies of invasive pneumococcal infections (predominantly pneumonia) indicate that in critically ill cases, including HIV-seropositive patients, combination antibiotic therapy is associated with a lower mortality than monotherapy.

If anything good came from Chuck Schuldiner dying of AIDS, it was advancements in treatment for other death metal musicians who gave up on nature and embraced humanity, joining the normie herd in its quest for immortality through ego in the process and thus, weakening their immune systems.