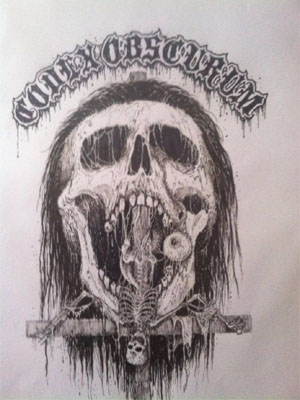 People thought the golden age of metal zines was over. However, now that the internet has flooded the world with low quality information, including Garage Band musical projects, there’s a new need for zines: to find the good stuff and celebrate it.

When you think about it, almost everything you’re exposed to on a daily basis is a commercial message. Whether it’s some commercial on TV selling you Viagra, someone soliciting “likes” on Facebook, renting your apartment on AirBnB or even a news broadcast, money is changing hands.

How this works is that the person creating the information makes it about a topic on the surface, but in its inner structure, it’s about the sale. Some material works from the opposite direction, and makes its inner structure about the music itself. We call that media “underground.”

Codex Obscurum’s second issue has two dimensions to it. The first is how it looks, and the second in the quality of information inside. As someone who lived through the years of four-track production and grainy xeroxed zines, the former doesn’t influence me much. It’s in the information zone that Codex Obscurum thrives.

The staff behind this magazine have clearly put a lot of effort into acquiring interesting interviews, stories and relevant record reviews. What other zine do you know would contact Burzum mastermind and known church-burning neo-Nazi Varg Vikernes, and only ask him about his new role-playing game? Or would create a Slayer tribute that’s this personal?

In addition to the human interest stories, the bread and butter of this zine is its scene reporting. An interview with Incantation shows more of the band than we’ve seen in a long time, getting into the depths of its motivations and musicality. There’s a killer Morpheus Descends interview and a wad of record reviews that are not only coherent but insightful.

No zine will be perfect in form or content. Some of what goes into this issue of Codex Obscurum struck me as irrelevant to my personal pursuits but it’s hard to argue against inclusion of longstanding local scene veteran bands, and those interviews turned out to be interesting, so it’s a quibble at best.

In form, this zine could improve. Luckily, their error is that they are trying too hard. The editors created a number of different layouts, with different fonts and background colors, to try to liven up the layout. My advice is to stop doing this, and to go back to the whitespace backgrounds of bygone days, but use space more efficiently.

Codex Obscurum could fit in more content by modifying its layouts in this way. Similarly, for record reviews, just use a table grid. You don’t need to come up with something visually arresting in every case because if you’re using the space efficiently, it will be packed with information. Typerwriter font is fine because it copies well, unlike some of the Olde English and Stencil fonts used here.

That being said however I thoroughly enjoyed this zine and its writing style. Unlike the blog-influenced writing of the mainstream media, this zine does not take a few nuggets of information and drown them in a sea of happy social noises. It cuts to the chase, and starts dishing the vital knowledge without a lot of backstory and chatter.

Best of all, this zine understands the underground. Codex Obscurum is written from the perspective that the truth is out there and most people don’t want to see it and refuse to even take hints that it exists. Thus, that which wants to keep its integrity must stay underground, and requires dedicated zines to explain it to others.