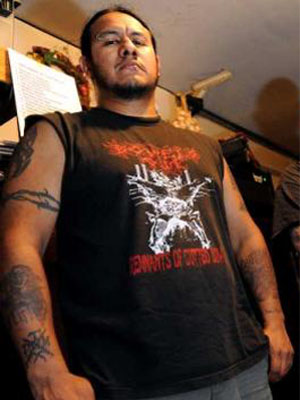 As metal continues to grow in popularity, outsiders to the genre find it more appealing. They see it as an unknown region, or an exotic culture, and in comparison their lives seem drab. What is it that makes hordes of people headbang to violent and abrasive music?

This was the question the Amarillo Globe News posed to death metal band Abolishment of Flesh and it received an answer it might not have been expecting.

The band painted a picture of death metal different from what is commonly presented in the media:

“There are a lot of different things going on at the same time,” [guitarist] Cazares said. “It’s very comparable to classical music.”

“We have a lot of weird time signatures and different changes like classical music does,” bass player Chuy Camacho said. “There can be three different things going on in the music at the same time.”

In other words, rather than the circular key-centric two-part composition of rock and pop music, death metal uses chromatic scales to develop an internal dialogue and motif evolution through pattern as opposed to harmony alone, such that notes are relevant more to previous notes and riff shapes than they are to a sense of key or rhythm.

In death metal, notes stream forth in multiple tones and directions, creating a tapestry of sound, similar in goal of a symphony: each part is musically literate on its own, yet when put together creates something that transcends each individual instrument.

When musing on why death metal is not popularly regarded as an art form, the band speculated that the genre has been overtaken by bands that have confused aesthetics with actual content:

“We don’t get taken seriously because other bands make a joke out of it — try to get as perverted and as gory as they can,” Camacho said.

Not content with being a sideshow, the band decided to forge ahead and create music with quality control. Playing old-school style death metal with melodic interludes; the band creates a style of music that appeals to both veteran fans of the genre and newcomers that may discover older classics through discovery of the techniques presented.

And the reason the band plays this type of music?

To Cazares, death metal “talks more about what’s real or what’s going on in life.”

Thus the essence of Death metal described: piercing the veil of deception and beholding reality.

5 thoughts on “Death metal as art in the media”