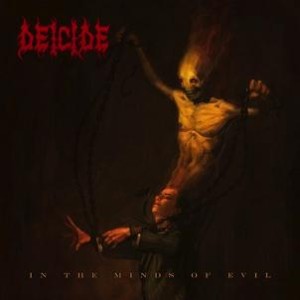 If you break any ground as a band, you will suffer from momentum inertia. Your initial direction will carry you quickly to its end, and after three albums, you will find yourself with a loss of direction.

This occurs because in your vision, substance and form were joined, and you made a language out of what you wished to express. For some visions, a lifetime of specifics can be created; for most, there are big picture things to do, and then emptiness.

Deicide hit that point after its groundbreaking Legion. They put everything they had, worth about what ten bands do in their lifetimes, into that album. They wisely made a followup that simplified their approach but made it harder hitting.

After that, however, the band has been searching for a direction. Serpents of the Light adopted some of the black metal conventions of the time, but ended up too sing-song; their efforts after that have been varieties of heavy metal and death metal that never quite grasped a direction.

On In the Minds of Evil, Deicide return to the roots of death metal and make an album along the lines of Entombed’s Clandestine: bluesy leads, tremolo picked choruses, divergent riffs for textural variation. It doesn’t have the grandeur of the Entombed variant, but it achieves the 1992 death metal feel very successfully and is much more internally consistent than previous Deicide works after Serpents of the Light.

Vocal rhythms often recall the more intense moments of Legion and Once Upon the Cross and these, while repetitive, are not offensively so. Riffing ranges from old-school death metal to melodic heavy metal, but mostly stays within the zone of influence picked by the first wave of American and European (including a Carnage riff) death metal bands.

With that change, Deicide is actually making a form of music that came after their initial work, which while it used death metal vocals, like all forms of percussive death metal was at least half speed metal. On Deicide and Legion, the primary influences are Slayer Reign in Blood and Sepultura Beneath the Remains structurally, but the riffing style is more like Exodus crossed with Possessed with the complexity and intensity turned up to eleven.

In the Minds of Evil shows Deicide moving past its original speed-death hybrid and into pure death metal, but retaining a huge amount of heavy metal influence. The victory of this album is its consistency. Quality-wise, it’s on par with Serpents of the Light but with some of the intensity of Once Upon the Cross. The result is somewhat blander than their original albums but more consistent and with more substance their intermediate works.

Deicide may never return to the days of Legion, mainly because it’s an impossible act to follow. After years of wandering in darkness (or, in their case, light) Deicide have found a voice again, and they can only succeed as they expand upon this method of uniting content with exterior.

5 thoughts on “Deicide – In the Minds of Evil”