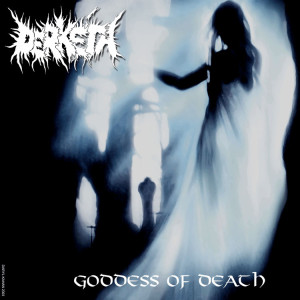 In the winding genealogies of East Coast death metal, Derkéta shows up as the band that connects others but never had a release of its own. To fix that, a few years ago the band compiled all of its recordings to date onto a single album named Goddess of Death.

Like most compilations, Goddess of Death is better suited for fan listening than a casual introduction because there is heavy repetition of songs since each showed up on more than one release. The good news is that you can listen to these songs “grow up” and refine as time goes on, which is why it might make sense to listen to this CD from finish to start instead of the usual method.

Derkéta bill themselves as doom metal, which may be true since doom metal isn’t really a genre but more a description of bands that play slowly with morbid feeling, but the underpinnings of this release are pure old school death metal, with the feeling of the hopelessness of the industrial city merged with a mythological sense of human mortality. Like other doom-death bands Derkéta specialize in thunderous, resonant, slow and brooding chromatic riffs which build up to a mood of darkness with an inner core of sentiment.

Goddess of Death will most appeal to someone who appreciates the charm of the era, which includes rough production and musical theory that has more of “winging it” than reliance on formality. The riffs are slow, but inventive, and songs while utilizing standard structure are prone to sudden breaks and twists. The result is a shuddering wall of sound that projects its mythos of mordant sensation through radiant sound.

After this compilation, Derkéta went on to record a full-length that showed more influence from the melodic side of doom but those influences are also audible here, just in more subtle and tentative form. Combined with some uptempo riffing, a little bit of primitive death-doom drone, and just the right amount of panache, Goddess of Death satisfies the old school death metal urge.

7 thoughts on “Derkéta – Goddess of Death”