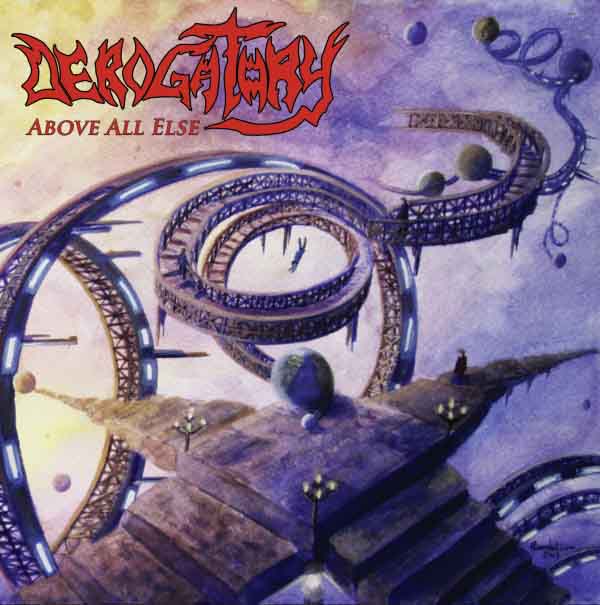 This article contains an album review, interview and live stream.

Derogatory – Above All Else

Derogatory returns to the oldest form of death metal which is the fast and muscular rushing tremolo-picked phrasal riffs that Slayer, Morbid Angel, Massacra, Mortuary and Sepultura made famous. Much like those earlier acts, Derogatory creates a rhythmically compelling work in Above All Else that adds depth through the contrast in riff phrase and the sensations those evoke.

The most reasonable comparison for this album would be the debut works from Mortuary and Vader, both of which utilized this style in a method that kept a rhythm rolling throughout despite numerous tempo changes. Derogatory have sensibly avoided much of the stop-start rhythm that made later death metal bands unable to keep a steady stream of riffs with consistent intensity and instead of using abrupt pauses, keep riffs flowing into one another like a transfer of momentum between wrestlers. Spidery erratic lead guitars complement this with an otherworldly sense much like the leads on early Incantation.

Above All Else provides the essential power of death metal through a feast of riffs that combine like DNA in a primordial pond spawning life. Context expands, meanings connect, and songs emerge from chaos. While this is a simpler version than many riff salad bands, it displays technical prowess and an adept sense of what makes a great metal song. Individual performances are strong but vocals and drums could be more aggressive about distinguishing themselves across the span of each song. While this is an older style, it breathes new life through Above All Else. 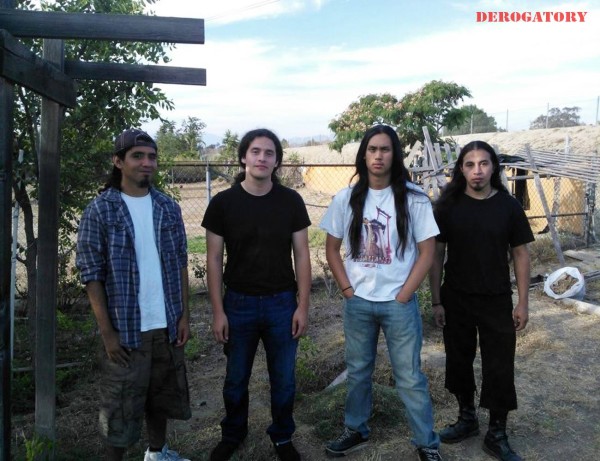 We were fortunate to get in a few words with Christian Ordonez of Derogatory about the band’s past, motivation and future.

What’s the concept behind Above All Else?

The concept of Above All Else is explaining how people always long for more than what they have. Whether it be power or self satisfaction, people are always trying to obtain more from what they already know. The entire album is not based off this topic but its one of the subjects spoken of more than once on the album; other subjects include reality, space, and life

When did you as individuals get into metal, and what was that album that compelled each of you to decide to be full-time metalheads? (Or are you?)

Chuck Schuldiner and Luc Lemay inspired me (Christian Ordonez) to pick up the guitar and just try to write something decent, and three out of the four members go to school as well, but I am sure we would all love to be metalheads full-time.

What style of music is Above All Else? Does it reflect your influences? What were you listening to while you composed and recorded this album, and what inspired it?

Do you have influences and inspiration beyond music, like famous historical characters, novels or plays, TV shows or movies, forces of nature, metaphysics and religion?

The only influences I have are those of various musicians I favor. Music has always been a huge part of my life and there is really nothing else that motivates me or drives me more then great music.

Can you tell us how the band was formed, and your history to this time? How do you think this will change with Above All Else being released?

I started the band back in late 2011. I had some material and we worked off of that and in the months to come I continued to write more music for the band exploring different lyrical topics and trying to create a different sound for metal. I believe that with Above All Else being released Derogatory will prepare for the second album to be something more than what Above All Else is. Nonetheless I feel like releasing this album has matured us as a band and shows us our strengths and weaknesses and what we can improve on.

Is death metal dead? Do you think the old school styles are returning, or departing?

Metal will never die, especially death metal the genre is making a huge comeback there are bands left and right that play different styles of death metal. I think the old school sound has been popping up a little more but I prefer technical death metal just because of the musicianship. Anyone can be old school; for me its about breaking away from that, which we plan to do for the second release.

Can you tell us about these songs, and when they were written — were they composed as a batch for the album, or have you been saving up material? How did you record this album, and what aspect of its production are you most proud of?

I wrote all the music and lyrics and they were all written pretty quickly. Each song holds its own meaning with different subjects for each track. We did the recording ourselves: our lead guitarist did the sound engineering end of things and spent countless hours trying to obtain a great sound that captures the feel of the music. I’m very proud of the production for the album because we relied on no one but ourselves to record our debut

What’s next for Derogatory? Are you going to tour? If so, where do people see you? If not, how do they learn more about you?

We plan to tour and spread our music and continue expanding our sound and fanbase we hope to go overseas to Europe and support Above All Else!

Derogatory – Above All Else Live Stream

7 thoughts on “Derogatory – Above All Else”