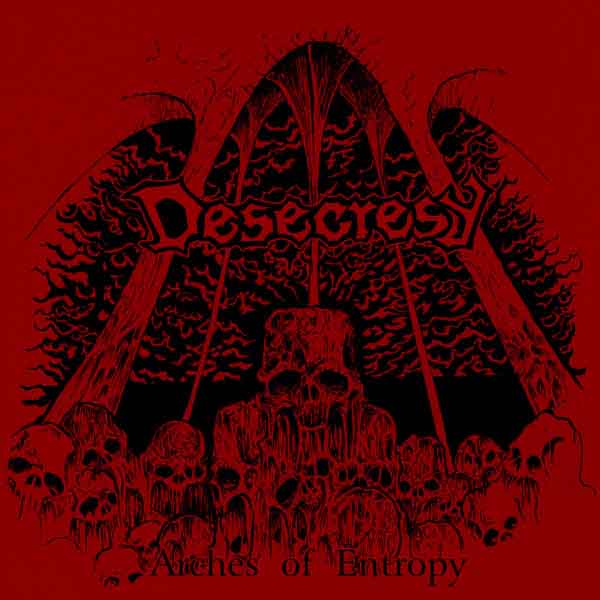 Unlike many bands, Desecresy — the product of experienced musicians a decade after their first entry into the scene — formed with a full concept that manifests on the first album as a slow form of death metal. Peeling back the layers, influences can be seen at many levels here, but the most prominent are Bolt Thrower for the sense of rhythm, Carnage for riff transitions, Therion for use of synchronized strumming to adjust rhythm, and Paradise Lost for the use of lead-picked melodies evoking harmony in the riff below for a resonant, haunting sound. The result more approximates the moods and sensations to the listener of a funeral doom metal band, but at varieties of middle pace instead of extremes, creating the feeling of a descent into a subterranean world populated by non-verbal creatures.

The important distinction between death metal and doom metal that appears in this work is the tendency of death metal toward wonder, and a Lovecraftian obsession with the workings of the universe, where doom metal focuses on a despairing, passive and self-focused mood that makes no such commentary and in fact symbolizes fatalism. Desecresy keeps that outlook, and shears from it any sense of real-world issues such as the crusade against Christianity or need for social justice, replacing those with a mythological view of existence in which darkness is not self-pity but an outlook reflecting the red in tooth and claw essence of nature, itself a logical response to the need to avoid stagnation and mediocrity. Like Bolt Thrower, Desecresy envisions a world of constant warfare, but in this case the warfare emerges from the clashes of biological and mystical entities rather than modern political forces. All of this emerges from the music itself — the lyrics could as well be ingredients written on soup cans — which uses its riffs in a constant grinding which slowly grows into articulation of dual principles, ending without resolution into a singularity but a fragmentation followed by evolution which more reflects the state of nature in which conflict creates speciation instead of singularity. Riffs start as two chords colliding, then through the slowly equalizing rhythms of downstroked chords reach equilibrium, at which point they mutate into something else. The intense similarity of many of these riffs, built of the same few chords, puts emphasis on their form and its mutation and development from a microbial state to that of full of organism.

Over this flow the type of chanted vocals that adorned the first Therion album, using the death shout not as a rhythm to impart urgency to the guitars, but in a timekeeping role that counterbalances that of the drums which serve more as a texture of rhythm to allow internal motion to have reference points. In the midst of this sonic landscape the reverb heavy lead picking of melody creates a sheet of sound against which the power chorded rhythm guitars can develop, allowing songs to slide forward under this cover and develop what are essentially background riffs into rhythms that pick up additional internal variation and thus command more complex riffs. Desecresy generally keep it simple and grinding in the style of middle-period Bolt Thrower, but at crucial moments intervene with complex riffs and elegant transitions. This completes the cycle of this album, moving from serene but conflicted stability to complex and ambiguous change, a repeating pattern which creates the impression of lawless growth and beauty appearing from nothingness that lingers in the mind of a listener like a nearly-forgotten hope.

5 thoughts on “Desecresy – Arches of Entropy”