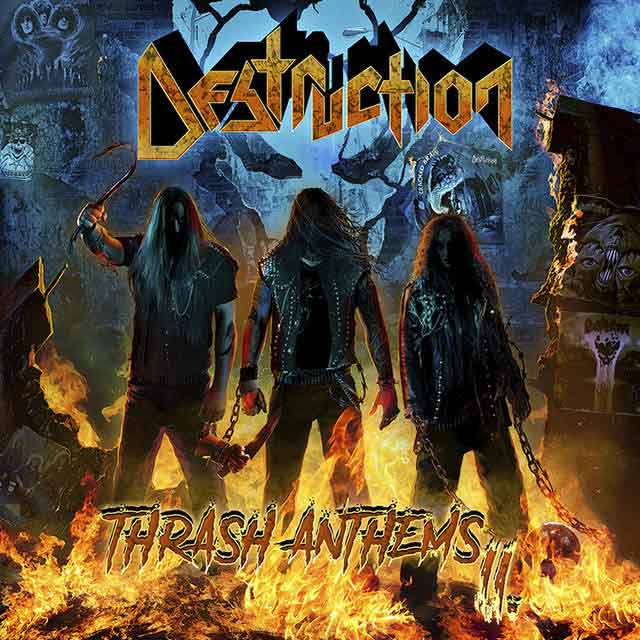 German thrash titans DESTRUCTION will release their new ‘best of old school’ album Thrash Anthems II on November 10th via Nuclear Blast Records. To promote the album, the band are rolling out a series of trailers covering the making of the album. Today sees the release of the first trailer, in which drummer Wawrzyniec “Vaaver” Dramowicz discusses his part in the recording process. Watch here: https://youtu.be/zz1G5fz_JuU

In 2007, DESTRUCTION proved how successful re-recording some of their timeless classics and re-imagining history could be. Tracks like ‘Frontbeast’, which was only ever released on a demo back in 1983, have been included on the forthcoming release. Fans will also be pleased to hear that Schmier has lent his vocals to the track “Rippin You Off Blind”. The original song features on the CRACKED BRAIN album.

The follow-up to 2007’s Thrash Anthems is ready to rock the metal world and shows how fans can be part of both a band’s history and future. For Thrash Anthems II, DESTRUCTION called upon on their loyal fans through PledgeMusic to help them create the record and contribute to the band’s epic history

Mastermind Schmier states:
“As it is a part of our past to relaunch classic songs from our history with a fresh face and we had many demands on a »Thrash Anthems« continuation, we decided to do a second part of this re-animation of classic 80s DESTRUCTION material. For us it was important to chose the tracks with the fans and first when NB did not wanna do the album we decided to do a pledge campaign to raise the fonds for the production together with the die-hards.

To make a long story short, we know not everybody will like these new versions of those thrash evergreens (just listen to the originals then) but it was an important task for us to keep them alive for a whole new generation of metalheads that love those fresh and brutal new recordings. We are very happy now, that our label is finally releasing this collection of thrash classics. The vibe on this record is so vicious, uncommercial and has this 80s feeling with a even more aggressive edge and THAT is was made our THRASH so special, in the good old days and now!”

This stunning artwork was created by acclaimed artist Gyula from Hungary, who has also created artwork for ANNIHILATOR, GRAVE DIGGER, STRATOVARIUS, TANKARD and many more.

Latest album Under Attack was released in May 2016 and hit the charts worldwide as follows:

“Second To None” OFFICIAL LYRIC VIDEO: