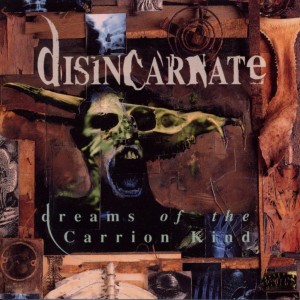 The brainchild of James Murphy, a guitar virtuoso who released two instrumental “shred” albums through Shrapnel Records, Disincarnate is in theory an underground metal dream made reality. The band released its one and only album in 1993 on Roadrunner Records. Murphy’s legendary lead guitar work on Obituary’s Cause of Death created the promise of a killer album was in the making, only it was never delivered.

Disincarnate is part of the first wave of post-Human era Death/Cynic bands who were making death metal explicitly play nice with the Headbanger’s Ball and Guitar World audiences under the guise of Floridian rhythmic death metal. This watered-down death metal was designed to appeal to the casual Pantera and Chaos A.D. metal fans of the time. On Dreams of the Carrion Kind, song structures are simple and pop-oriented, reminiscent of an 80s speed metal act like Exodus, which is a riff salad without themes developing within it.

“Monarch of the Sleeping Marshes,” the best composition on the album, fails to capture its surprisingly elaborate lyrical concept, impeding upon the momentum of its inspired introductory riffcraft with an awkward pause after the chorus to make way for an incongruous bridge of generic Benediction mosh fare. Other tracks like “Soul Erosion” and “Deadspawn” sound like Brutality playing along to bouncy Fear Factory/Pantera chugging fare with death metal vocals and lyrics adapted around that framework, no doubt in a vain attempt to bridge two trends from the era. At best, it could be compared to a lowbrow version of the first half of Resurrection’s Embalmed Existence.

James Murphy’s dextrous playing and the early Roadrunner Records connection would make this seem innocent, but don’t be fooled. This release is cleverly disguised as something profound but is no more advanced than Benediction’s Transcend the Rubicon. It isn’t awful to the point where you would rather swan dive into a wood chipper, but the overly bluesy doom riffs and the grooved out relaxed tempos of tremolo riffs in cyclical song structures that break for a “guitar hero” solo suggests this band as having the confused character of something that wants to be morbid and sinister, but also pander to the Dimebag Darrell worshipers of that era.

While some of the wiser among us would simply dismiss this as not up to par with other releases in its genre, on closer inspection, this album alongside Malevolent Creation’s Retribution and Obituary’s The End Complete in addition to Roadrunner Records vast distribution network assisted in streamlining death metal into a more rock centric style that allowed the Gutted/Kataklysm mosh fare with flashy distraction breaks to become an Ozzfest/Hot Topic mainstay in the 2000s.

8 thoughts on “Disincarnate – Dreams of the Carrion Kind”