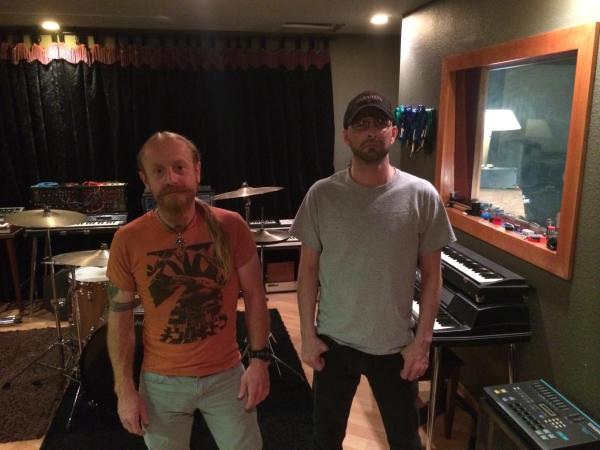 Divine Eve’s Michael Sleavin and Matt Killen in the studio.

Doom/death metal band Divine Eve penetrated the walls of the studio some time ago to record their forthcoming full-length following up on the 2010 release of Vengeful and Obstinate, an EP which saw the Texas band build on the strengths of their 1990s debut As the Angels Weep. Since that time, audiences who enjoy the type of fusion between Swedish death metal, punkish heavy metal like Motorhead, and doom-death like Cathedral have eagerly awaited new material from Divine Eve.

It appears the wait may be over, or at least nearly so. An advance track, “Into the Conquest End,” graciously loaned to this writer by Divine Eve, shows the band maturing and stripping down their sound. Like classic death metal, Divine Eve know how to use a theme well, varying it both in speed and texture and also expanding upon it as the song progresses. The song begins with a raw death metal riff — reminiscent of Death “Altering the Future” — and repeats it on a trancelike beat. This theme repeats in two forms, one with an ending trill and another with a more rigid, doomlike conclusion. The band then breaks into an energetic and simple riff derived from the middle phrase of the previous at an upbeat punk tempo, and use this to introduce the chorus riff which hammers out the theme of the song in a riff answering the first theme.

The band rides the second theme against the chorus and picks up an energetic groove. This part of the song quickly falls into a comfortable zone, both enjoyable and straightforward, which appears to be the moment the band were waiting for… to strike. At this point, the song stops with a simple standoff riff reminiscent of the opening theme of Beethoven’s fifth in its rigidity and simplicity, then returns to the first them before dropping to a slower and darker version of the second theme which answers it in a mode more like that of the chorus. The band then transitions through a lightly strummed, drumless heavy metal style anticipation pause and then builds on that melodic riff as a means to transition to to a bounding doom metal riff that would have been at home on As the Angels Weep but with more of the old-school doom that Saint Vitus made famous. As this mood builds, it falters and collapses into the first theme, then chorus riff, and finally a variant on the standoff riff. The song wraps up its simple elements by repeating them multiple times in different pairings to create a sense of a deepening meaning emerging from the mundane, like an occult meaning derived from the pattern of everyday objects.

Divine Eve added a sense of mystery and atmosphere to the world of death metal bands that play extensive segments of doom metal in their work, expanding upon a lengthy list of death metal influences. Like Cianide, the band has drifted toward a fusion of older metal styles (notably Motorhead) that maintain the same mood, which is a bleak but militant droning which suggests a dystopian collapse followed by rise of vengeance warriors bent on restoring an atavistic order. The result gives more variability to the death metal style and may confuse listeners in a positive way by taking different ideas and restating them in the language of death metal. The production on this track takes an organic and spacious sound and gives to it the dense textures of ancient walls, clarifies drums far more than previous releases and keeps vocals grim but intense enough to stand on their own. The result suggests that the power of the older material will take on a new militarism on the forthcoming album.