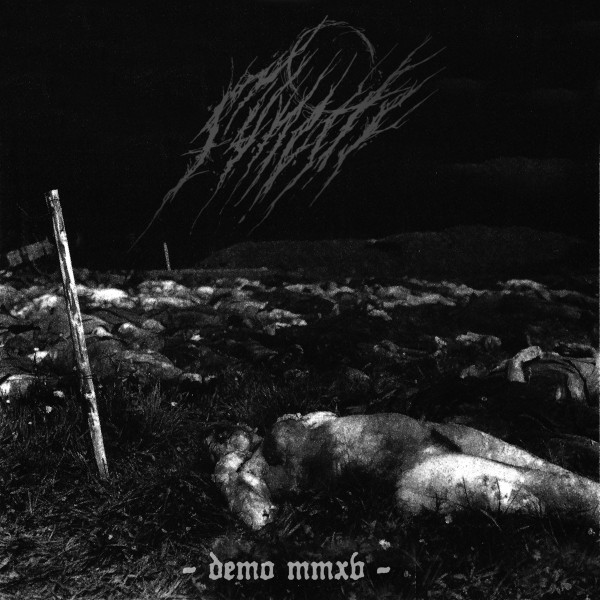 Funeste play black metal with a tendency to emphasize atmosphere through the creation of spaces, voids within the music in a treatment of the style that is very modern. In Le Triomphe du Charnier
one is able to identify great potential, as some of the elements in the music are very well-written, solid and balanced musically, consistent while not forgetting to create the movement necessary to give life. On the other hand, there are also more regrettable decisions here that can lead a fan of the old school to cringe. What the reader needs to understand is that those who understand the old school have this sort of reactions to many methods of the “new school” because the latter tends to lack a center, favoring whims that border on an experimentalism that is little more than ignorance of composition in its complete sense (and not just attending to its most basic and superficial necessities like playing in a key or using a particular mode).

On Le Triomphe du Charnier, Funeste often use arrangements in which three guitars playing distinct parts may be recognized. Sometimes there are only two or even as little as one guitar present. The transitions between these are reasonably smooth although sometimes tend to verge towards the modern tendency of lazy contrast excused as surprise. When the guitars are treated like melody lines, sometimes collaborating, sometimes providing accompaniment and counter-melody, sometimes just forming a mega-riff, Funeste show us the amazing arrangements that can be applied to metal guitar styles without having to sound superficially “neo-classic” or to resort to jazz-mongering.

There is a particular element on this album that stands out as the rotten apple in the barrel: the drumming. While in the three-part guitar sections a guitar may sometimes engage in some indulging and completely unjustified (musically unjustified, that is, not connected to the rest of the music very clearly, but just floating as an extra appendage) decoration takes place, the drumming patterns seem disconnected from the music most of the time. It is not enough that the drums play in the correct tempo and time signature, but this instrument also has to blend in with the rest of the music in a way that subordinates it to the whole and not as a self-important and self-agrandizing member. I am sorry if the traditional metal’s balance consisting on having the drums play a supporting role hurts the ego of drummers but mindful and reserved composition should come before anything else.

Neo-metalists of recent times take this to be a kind of close-minded imposition on their creativity and will try to release drumming from its subservient role and let it run around unchecked, affirming its presence and new-found freedom as a child who’s been chastized for the least of things throughout his life and grows up to suddenly find himself free of limitations and now runs amok performing actions of painfully self-referential significance. So it is that we find the drumming in this album attempting to take over dominance, fighting it out with the rest of the music, and accounting for the unnecessarily busy feeling of the music that is taken by neo-metallers as “creative complexity”. In truth, this is no more than lazy self-indulgence, this so-called complexity being no more than an increased quantity of notes. The drums should work from within the nature of the movement of melody and harmony to enhance the whole, adding to it not as something else occurring besides the rest of the instruments but as an indispensable breathing apparatus.

Here the main thing was to understand the combination and opposition of the three great factors in music- rhythm, melody and harmony; to understand, for example, that the cadence that is harmonically and melodically perfect will have a weaker effect if it does not occur simultaneously with the rhythmic cadence
— Johannes Brahms

Commending Funeste on its overall music-organization and especially on its very promising and mostly controlled guitar arrangements is in order. The band’s drummer is more than obviously technically gifted and definitely has talent but he or she must make decision here and now: will you write music as a “musician” looking for technical performance perfection or as a “creator” — a composer trying to give birth to an artistic expression? As a black metal drummer trying to achieve balance, it is recommended that one should first study the work of Fenriz in the albums released with Darkthrone around Transilvanian Hunger, trying to understand how and why he plays what he plays. After that a hard and long look at Adrian Erlandsson’s work in At the Gates’ The Red in the Sky is Ours will prove to be an invaluable lesson of drumming giving life to music in creative, varied yet reserved manner as well. Even though to simple minds it might seem that he is just being limited, others might understand his intention towards affording music with the necessary percussion while retaining proportion and a semblance that does not diverge too greatly from the intended concept.