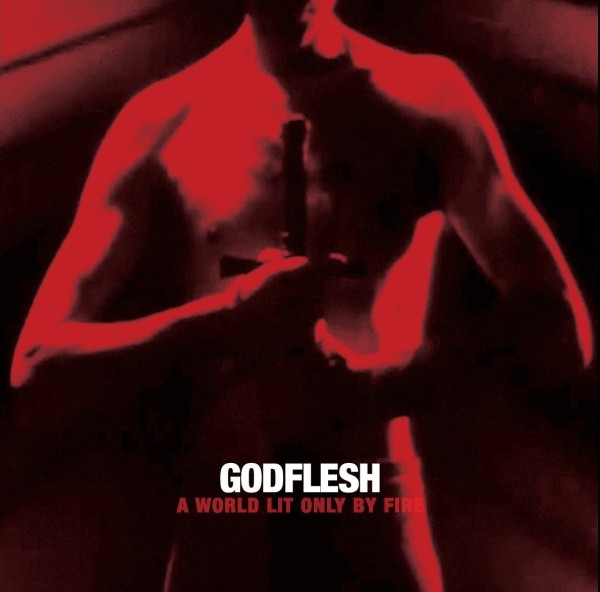 In the early 1990s, everybody who was anybody had a Godflesh Streetcleaner t-shirt. That album broke out of the usual problems with industrial, which is that it was generally either rhythm music without beauty or dance music without aggression, and escaped the tendency of metal to be as intense as possibly by mixing in aspects of melody from crustcore and indie rock.

Since that time, Godflesh creators have spent their time searching for Selfless II. The crisis is that they are unsure of why that album is so revered. The band began its career with the rhythmic but amelodic Godflesh EP, which became repetitive and noisy but never rose to the level of grace of the album afterward, Streetcleaner. On that album, song structures expanded and use of melody and guitar harmony gave it a power beyond what the EP had. Then came Slavestate which introduced more of a techno influence, but underneath the skin was the same looping song structures with little more than rhythm that defined the EP.

After that, Godflesh tried Pure which attempted some melody, and when they were accused of being too “rock” on that album, Selfless which went back to tuneless droning in an industrial landscape for the most part. After that, the band experimented with alternative rock (Songs of Love and Hate, later resurrected in one of the bravest experiments in popular music, Songs of Love and Hate in Dub) and lost direction until Broadrick found Jesu as an outlet for his shoegaze/indie hopes. He kept enough of the metal and crustcore (remember his role as founding member of Napalm Death, which essentially combined crustcore and DRI-style thrash to make a new art form). But with the second album, Jesu lost its independent voice and became indie/shoegaze entirely, thus dispatching legions of not just metal fans but those who seek something unique.

With A World Lit Only by Fire, Godflesh attempts to return to the musical foreground but makes two critical mistakes. First, let us assume that Godflesh like a serial killer is a duality composed of “hard” and “soft” elements, which are stylistically grindcore and indie/shoegaze respectively. Let us also assume somewhat correctly that these create another binary of extreme rhythm and heavy distortion on one hand and melodic intervals and harmony through drone on the other. The history of Godflesh shows a band bouncing back and forth between these poles. When an album gets too soft, as Jesu did starting with Conqueror, the band bounces to the other area in which it knows it can succeed and sell product. On the other hand, when an album gets too abrasively grinding, it tries to go back toward the middle where it perceives Streetcleaner as existing. Its first mistake is being unable to find a style that balances its two extremes without varying them song by song, and as part of that, in failing to pick up on how much death metal influenced its choice of song structure and radically improved Streetcleaner. (When I last checked in 1994 or so, Godflesh was outright hostile to metal — understandable given the collapse of death and black metal in that year — although a few years earlier the influence had been more accepted as fact.)

The second mistake made by this band strikes me as more crucial. People create great albums in just about any genre but they need to introduce enough complexity to be able to clearly express an experience and corresponding feelings so that the audience can identify with the work and appreciate the viewpoint it illustrates. Napalm Death for example on its early albums succeeded by using individual songs as phrases in what essentially became a longer atmospheric work, but few people listen to it on a daily basis because it is mostly novelty. Not many people hail the Godflesh EP either because despite being a stylistic outlier, it makes for poor listening unless you like droning chromatic grind. The band lacked enough to express itself. With Streetcleaner, the band not only nailed style (mistake 1 rectified) but also nailed content (mistake 2 fix) by introducing enough complexity in song structure, melody, harmony and riff shape to be able to create atmosphere and manipulate it. Everything the band has done since, with the possible exception of Love and Hate in Dub, has focused on a one-dimensional approach where style is substance. While this “the medium is the message” makes sense in an academic setting, with music, it cuts out what Godflesh do well.

At this point, the meat of this review — the part that actually focuses on the new Godflesh album A World Lit Only by Fire — should be fairly obvious: Godflesh reverts to the mistake it made on its initial EP, Pure and Selfless and makes an album that is abrasive but repetitive and fails to introduce the elements of tension that gave Streetcleaner its power. If Godflesh finds a way to make an album like Streetcleaner in any style, even disco, it will take over the world. But that did not happen here. Songs are for the most part simple loops of verse and chorus riffs that while musically competent are essentially boring and rely on rhythm — very similar to Selfless — both in driving riff and in having an offbeat conclusion to each phrase. Over that, vocals rant out a phrase or two. The second half of the album improves with “Curse Us All” which has a powerful rhythmic hook, but the band never develops any of this potential into something with enough depth to want to revisit. This reveals that Godflesh has confused error 1 (style) with error 2 (content) because style cannot magically create content; it can only fit content and thus make it easier for the artist to visualize the content he or she is creating. Thus what we get is an album that sounds like classic Godflesh, but misses out on both voice and substance of classical Godflesh. Summary: Selfless II.

While that seems unusually cruel, even for a site known for its unrelenting musical cruelty, the greatest cruelty would lie in rubber-stamping this rather droning for fan consumption with the formula that most reviewers will endorse: “It’s hard like Streetcleaner, therefore it must be Streetcleaner II, not Selfless II.” This rubber-stamping displaces the funds that fans could spend on a better album and instead redirects them into what ultimately appears to be a dying franchise here, but also, lies to the artists about what they do well. They do not know, as is evident here. What made Streetcleaner great was a fully articulated style that did not slide into Pantera-style angry-bro rhythm music nor wandered into fixie-and-Pabst self-commiserating shoegaze. It took the best from all of its influences, including death metal, and made from it a voice unique to Godflesh. They can do it again; A World Lit Only by Fire is not that album however.

13 thoughts on “Godflesh – A World Lit Only by Fire”