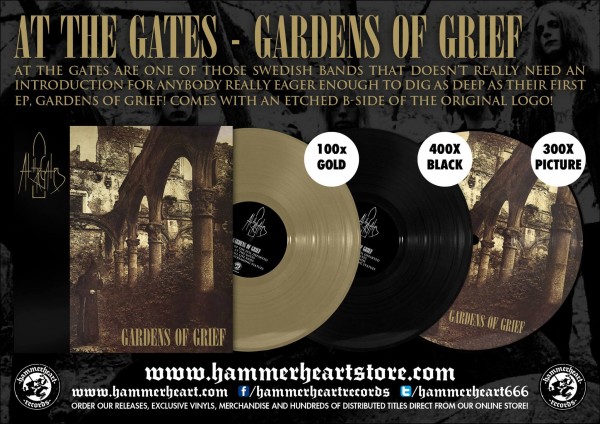 Hammerheart Records has re-issued the classic of Swedish death metal Gardens of Grief by pioneering progressive death metal band At the Gates. The label issued the following statement:

At the Gates are one of those Swedish bands that doesn’t really need an introduction for anybody really eager enough to dig as deep as their first EP, Gardens of Grief, which was released in 1991 on Dolores Records.

Being one of the more distinct sounding bands from the whole original Swedish death metal scene, they have managed to spit out a couple of really great albums in the 90s, the pinnacle of their career being 1995’s “Slaughter of the Soul”.

What we have here lads is a chaotic mix between great song composition, one of metal’s best vocalists (in my humble opinion) screaming his shit out and pure maniacal death metal the way its supposed to be played. Right from the start of the first track you will get nothing less than a punch in your face, to the groin and to the balls. Tempo changes along with the massive output of riffs used work perfectly to create a unique atmosphere that sends you right to hell. This is one of those birth moments of a band that further defined the typical “Swedish sound” that most of us know as being a kind of mix between crunch and white noise. Every song has a very mature approach towards composition, not sounding very melodic, but dark, vicious and awestruck. This is fierce, ruthless death metal played by people who had a spark in them and wanted to play crazy music.

This EP is a very good example of how a rough start can prophesy a band’s great career with no absolute low point whatsoever and be a marker for good things to come.

For fans of: Grotesque, Dissection, Watain