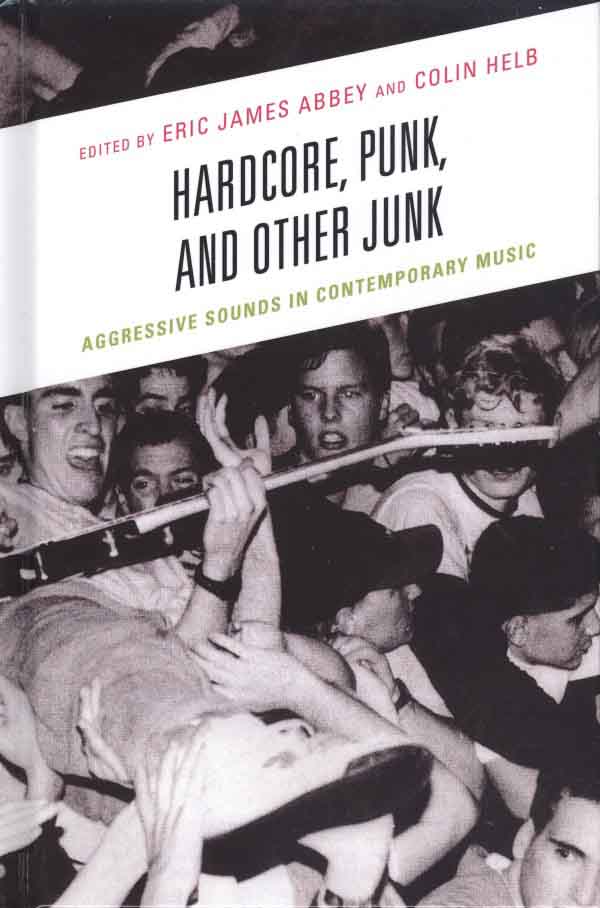 Metalheads tend to distrust academia. We distrust the machine in all of its forms, and since the machine accepts academia, we believe the voice of academia is tainted by interest toward social acceptance. Academia also has a habit of finding ways to cram reality into its theories rather than the other way around. However, some academics make insightful contributions to the study of metal and Hardcore, Punk, and Other Junk: Aggressive Sounds in Contemporary Music provides an example of the best of this process.

This collection of essays looks at extreme music in general and extends this to metal, hardcore punk and punk rock communities. Sadly many authors make the mistake many do of incorporating recent pseudo-metal hybrids as some form of legitimate metal, which spams their results with some nonsense. The balance of results however turns out for the best because these academics look at detail-level reproducible phenomena and so are able to avoid the kind of craziness that would happen if they took “modern death metal” to be a legitimate form of the genre. Since metal and hardcore punk share a heritage both influencing and as influences of one another, the multiple pieces on that topic serve to bolster the understanding of metal.

Ross Hagen‘s piece “No Fun: Noise Music, Avant-garde expression and Sonic Punishment” ventures into the world of noise as music and explores a number of theories of its appeal. His most tantalizing riff zeroes in on the idea that society attempts to control noise and categorize it by the containers used to sample it, thus the tendency of irregular acoustic noise is to overthrow the social control imposed for the convenience of society having categorical dominance. While this piece does not seem to be directly on point to metal, it explores the same sonic space that metal uses and suggests reasons for it that may overlap with the psychology of metalheads.

Nelson Varas-Diaz contributes writing that analyzes Puerto Rico as a metal scene and the historical antecedents for appreciation of metal in this unique context. While his research involves statistical analysis, the best part of it may be the narrative aspect where he explains the history of metal in Puerto Rico as a type of struggle to be heard. In this piece also can be found extensive information about founding and contemporary Puerto Rican metal bands.

While it is beyond the scope of this review to cover every piece in the book, several others merit immediate attention by the wandering metalhead. Mika Elovaara looks into the meaning of metal lyrics and finds something akin to the mythical-historical view expounded upon in these digital pages. As if clarifying Lords of Chaos, one of his research subjects from Norway opines:

I feel that it is important that people understand why they have been born and that other people fought for our well-being and to preserve our culture and society. Our cultural heritage is going to die because people ignore it or do not even realize its significance. Viking and Norse mythology have been described as something evil and distant, but in reality, it is close to home and not necessarily evil at all. That it is not Christian does not mean it is evil. I use the mythology to describe situations in the world and politics, actual topics that were part of our lives a thousand years ago just as they are today. One can be proud of one’s heritage and identity without any racist or nationalistic tendencies. And Satanism is quite outside of this.

His extensive interviews bring up other similar flirtations with the taboo which makes sense as metal is “edge music” that exists to push social standards beyond what they normally accept. He probes the filaments of metal’s obsession with the evil and dark, and yet finds a certain kind of benevolence. “They mean critical thinking and encourage independent thinking,” said one fan about metal lyrics. The entire study is too complex to summarize here but at a minimum provides food for thought about what metal is attempting to communicate.

Another metal-related piece by Marcus Erbe looks into the science of producing death metal vocals and what that type of sound might mean in the unconscious and shared experience of being human. He finds that human vocals universally split between a melodic voice and a textural voice, with the latter expressing “monstrous” sensations. He then explores the nature of the monstrous in psychology and finds that it includes both the other and our fears for what is within us. This thought-provoking essay fuels further the question about what it is in metal that is really socially unacceptable, its rejection of social mores or its seeing through them.

Other articles explore more specific topics. On the whole, the book shows a new face for academia in looking into metal that is less afraid of certain areas of metal that are alien to what academia customarily writes about and may reject attitudes held by the majority of academics. The insight offered into the mechanics of metal and the associated symbols that it invokes also suggests new areas for academics and thinkers to pry into this interesting genre. Hardcore, Punk, and Other Junk: Aggressive Sounds in Contemporary Music lives up to its title and presents a window into the troubling questions that most would ignore raised by these dissident genres.

2 thoughts on “Hardcore, Punk, and Other Junk: Aggressive Sounds in Contemporary Music edited by Eric James Abbey and Colin Helb”