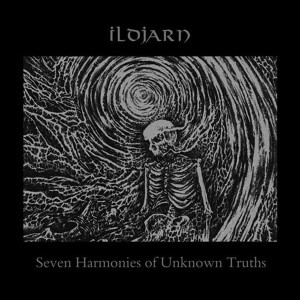 Originally shunned by most of the “new and wise” black metal community in the post-1995 era, Ildjarn emerged shrouded in mystery, and its renown has increased over the past almost two decades through the appreciation of writers and fellow musicians.

Seven Harmonies of Unknown Truths packages an early Ildjarn demo by the same name into a CD/LP release that showcases this band’s potent sound that mixed black metal, oi, drone and primitive folk music. The album has been released on Eisenwald Records and can be ordered here.

While those who have heard early Ildjarn will note the similarity to both the self-titled release and the material on the Ildjarn-Nidhogg compilation, but like other Ildjarn EP-length material Seven Harmonies of Unknown Truths presents a slower and more atmospheric vision of this band.

Structured as seven numbered tracks plus the archetypal Ildjarn song “Death Dynamics,” Seven Harmonies of Unknown Truths is like most Ildjarn releases an ambient composition as a whole where songs serve as motifs. Varying between the doomy and the faster edge of mid-paced, these songs return us to the lawless forest where the spirit of Ildjarn resides.