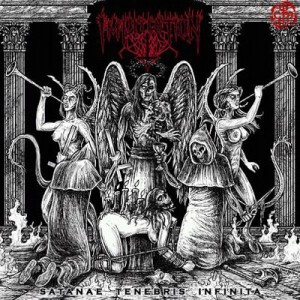 Houston, Texas death metal band Imprecation have returned after nearly two decades since their epic slab of morbid death metal, Theurgia Goetia Summa, and have not only not mellowed but have added a streamlined power to their sound which combines the best of old school doom-death, black metal and high intensity underground death metal.

Satanae Tenebris Infinita adds a smooth transition between distinctive moods to this band’s strong infrastructure of aggressive riffs and abrupt tempo changes, acknowledging that while Theurgia Goetia Summa created a masterful vocabulary of death metal motifs, Satanae Tenebris Infinita connects them together in a narrative that reveals their inner compatibility and thus shows more than tells of the dark topics of the album.

While the music industry has kept itself busy “playing metal” with metal-flavored rock and punk creations like the nu-core and indie-core genres, underground metal has steadily reinvented itself, with bands like Beherit, Demoncy, Summoning and Imprecation returning to the front with not only new material, but a new view of the intent and purpose behind their older works, fusing them into new languages with a mastery and control that was not present before.