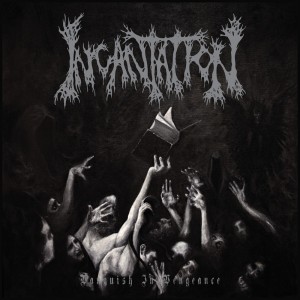 New York Death Metal band Incantation embark on a US tour in support of last year’s Vanquish in Vengeance starting in July.

Released last year on Listenable Records, Vanquish in Vengeance features over 50 minutes of the band’s trademark dark and occult death metal. Recorded at the infamous Mars Recording Compound with Engineer Bill Korecky and mixed and mastered by the legendary Dan Swano at Unisound studios, the album explores the genocidal nature of religious conflict.

The band commented, “July marks a number of shows for us throughout the States. We’re poised to devour your souls on our ‘Will of Vengeance’ tour. Label mates and brothers in battle Acheron will join us for the first wave of carnage. You’ve been warned!” This release and more band merch can be found at the band’s newly relaunched webstore at www.incantation.com.