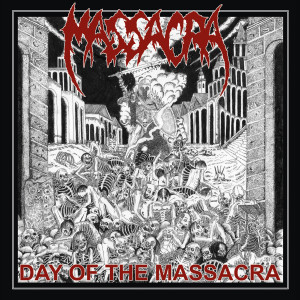 Massacra picked up the mantle of Slayer and Morbid Angel and crafted phrasal riffs into complex constructions which breathed pure energy but yet managed to take your breath away with their vast inner contrasts.

Final Holocaust and Enjoy the Violence never seemed to receive the acclaim that other death metal bands did, in part because for years they were tied up in legal struggles or out of print, but the influences of those two albums can be heard in death metal to this day.

Celebrating the influence of this foundational band, Century Media will on November 4 release Day of the Massacra, a compilation of the re-mastered “Nearer From Death”, “Final Holocaust” and “Legion Of Torture” demos. The sound is surprisingly good, considering that the raw material comes from tape and isn’t easy to work with, although “Legion of Torture” sounds raw enough that no amount of modern technology can save it.

Known mostly for their imaginative riffs, Massacra also knew how to make songs that felt like subconscious patterns that most of us have experienced in our day-to-day lives. There is something natural, second nature and familiar about these songs and how their riffs fit together like forest paths on the ascent of a mountain.

“Nearer From Death” of the three demos is the one that sounds most like Massacra in its final death metal form, and resemble the tracks that made it onto Final Holocaust. “Final Holocaust” reveals more of the latent speed metal influences of the 1980s, but also shows Massacra at some of their most experimental, with unorthodox riffing matching up to rhythms borrowed from old Metallica and Slayer songs.

“Legion of Torture” on the other hand shows this band as it came into form in 1987, and is amazingly advanced for that year. The experimental influence reveals itself as well, but here it’s harder to separate from the contortionist riffing that seems designed to be odd enough to invert people’s thinking about the world around them. There is even more of a speed metal influence here, but this compares reasonably with its primary influences, which sound like Slayer, Sepultura, Merciless and Sarcofago.

Having these formative demos on CD or LP will be a delight for any metalhead, and Century Media suggests that it will re-release the early albums as well. Although most people have focused on early the very early stages of death metal, or its maturity, not many have caught on to its fiery adolescence when speed and labyrinthine decoding ruled the day. Day of the Massacra brings back those amazing days and shows us the majesty of death metal in creation.