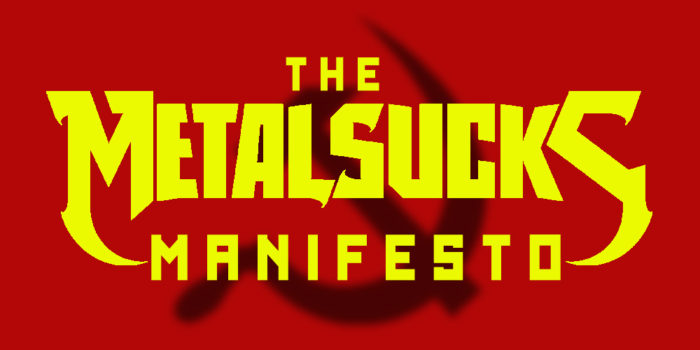 Vince Neilstein and Axl Rosenberg were lounging on the couch. Both were wearing complimentary Between the Buried and Me metalcore shirts received in exchange for a few joints. Only Vince was wearing pants; Axl was nervously clenching his anime body pillow with protruding breasts and three built-in silicone holes for Axl’s perverted delight.

“Don’t worry about her. Suck on this!” said Axl as he lit the end of Vince’s shofar they were using as a pipe before shoving it in Vince’s mouth.

“There’s nothing left in here you bitch-titted fuck! You smoked it all!”

Vince dialed their bald, Panturrible, Phil Anselmo doppeldanger comrade, Emperor Rhombus. “Rhombus, stop whacking it in the bathroom and come the fuck out. We’re going to smoke your stash.”

Rhombus stood up from Axl’s shit-stained toilet, yanked up his cargo jorts, and stormed out of Axl’s bathroom. He burst in front of Axl’s sofa, blocking Vince and Axl’s view to the flatscreen television.

“I have some bomb shit heebs!”

“What you uncut goy?” retorted Vince.

“How do you Jews know that?” asked Rhombus.

“Your smegma dick’s hangin’ out of your fly dumbass.”

“Fuck!” snarled Rhombus as he zipped up. There was no need to shove his member back into his jorts; one of two inches were enveloped by a layer of blubber. “I got some dank shit though. This shit is so gold, you two Jews are gonna love it!”

“This is skunk directly from Colorado. I swear it’s the shit my hymie brothers!”

Rhombus lifted up the velcro from one of his jorts’ cargo pockets, reaching deep inside. He pushed past his lucky, broken-in GameCube controller used for Super Smash Brothers until he grasped a large plastic freezer bag. He placed it upon Axl’s coffee table.

“What schwartz sold you this crap? What the fuck is this? Are you fucking with us? Did this come out of your ass?” barked Vince, who had a point as the compacted buds were about five inches long with a four inch girth when unfolded and colored a deep brownish green. Generously sprinkled across were small white crystals as if on a long, powdered donut; as if the most crystalline varietal of purple haze had been bleached white and pure like the flour used to construct fast-food hamburger rolls.

Axl sat up and pulled his penis out of his anime body pillow’s built in Fleshlight alternative. He leaned over and poked the weed Rhombus had laid out upon the table like a yule log.

“I haven’t felt any shit this firm since my Shake Shack cleanse of two months ago! The marbling on those were exquisite! This may well surpass it!”

Axl grabbed the ram’s horn and thrust his flaccid, circumcized babydick into the tip.

“With the weed you fat fuck!”

Axl pulled the shofar pipe off his penis and loaded it up with the marijuana that Emperor Rhombus had diligent prepared while Axl attempted to copulate with Vince’s shofar.

Vince placed his mouth right over the small hole where Axl’s penis had just been; it reminded him of his college days. He could taste the salty pre-ejaculate fluid that Axl had leaked.

“Light it up Rhombus! Let’s smoke this turd!” ordered Axl.

The smoke rose and swept the salty pre-come from Vince’s mouth down his throat. The thick, viscous white smoke went deep into Vince’s lungs. The white crystals were salty and delicious. They reminded him of the time his wife drank coconut juice before bed. Vince was deeply satisfied and moaned out “Wow!” before passing the shofar pipe to Rhombus.

“You go last Axl as you’re a sick shofar fucking fat fuck and I could taste the plastic of your weeb Fleshlight pillow!” bitched Vince as he trembled in pleasure. Rhombus was fellating the end of the shofar, shoving it deep down into his throat. Rhombus pulled it out gagging, covering the shofar in saliva and smoker’s phlegm.

“Light it fags!” Axl grabbed the grill lighter and lit the shofar pipe. The smoke rose up and hit Emperor Rhombus. He collaspsed on his backside to the floor, his legs spread and trembling in ecstasy.

Axl grabbed the lubricated shofar. He had to taste this. He stood up pantsless, lit up, inhaled, and fell upon his body pillow. He ejaculated, remembering the piece Grim Kim had given him way back when to get published on MetalSucks.

Vince Neilstein’s mind was racing. Why were the crystals white? Why did it look like a shit with cocaine on it? What could this Colorado donut skunk be? It then hit him.

Vince: “We just did angel dust man! We’re so fucked! My wife’s gonna kill me!”

Axl Rosenberg’s eyes rolled back. “We’re gonna be fucking schizo after this. Your grasp on reality’s gonna slip! We’re gonna be homeless! We’ll be talking about ourselves in the third person like Karl Malone and Geoff Tate!”

Emperor Rhombus stared at the ceiling, his pupils dilated. “I love you guys!”

Vince opened Axl’s white plastic MacBook which appeared to him as a woman pulling down pants to show Vince her genitals. The MetalSucks homepage came up with an attractive blonde woman, Whitney Moore, he had hired for three hundred bucks to host MetalSucks’ “This Week in Metal” for an overweight, low testosterone social justice warrior and militant feminist audience.

Rhombus was also swelled with desire and was overlooking Vince’s shoulder. The laptop appeared to him as an infinitely swelling pair of breasts “I got vids of her bro!”

“Yeah? From where?” wondered Vince.

Rhombus: “No, this is where that gook director found her.”

Emperor Rhombus reached into his jorts and pulled out a USB flash drive. He plugged it into Axl’s MacBook. “Unreleased amateur pornography casting couch footage!”

“Oh yeah!” muttered Axl Rosenberg as he sat up, his complimentary Between the Buried and Me shirt stained with a paltry amount of his own rapidly drying ejaculate like Monica Lewinsky’s dress while walking out of the Oval Office.

All three sat down on Axl’s sofa. Vince pulled his zebra print sweatpants down. Rhombus’s jorts were at his feet. Vince hit the play function key on Axl’s white plastic MacBook. Insteaad of their own employee, they saw a blonde woman with massive breast implants emerge from the MacBook that now appeared to be made of a crystalline structure like Krypton in Superman: The Movie directed by Richard Donner.

“You bullshitted us you Nazi fuck!” screamed Axl. Multiple erect members were peeing into the disgusting blonde woman’s mouth. Emperor Rhombus had shown them his collection of German urophilic pornography.

“Got ya goys!” gloated Emperor Rhombus as he seig heiled in his Aryan victory. The streams of urine flew out of the Macbook screen, all over the pulsating walls of Axl’s apartment and MetalSucks’ own faces. The PCP was starting to take effect. MetalSucks was wet.

A beautiful blonde appeared on the small, outdated MacBook screen. The white plastic MacBook was a gaping vagina to Vince, a Kryptonic crystal construction to Rhombus, and a Japanese schoolgirl lifting her skirt up to reveal white crotchless panties to Axl. She was the ultimate Aryan uberwomensch to them. She was a tall, shapely Northern European goddess.

She’s so much better than my obese wife. I want to mate with her. I want her to bear my chosen seed! thought Vince.

“I want her to be real!” gasped Axl imagining the pure Aryan beauty in a schoolgirl outfit whining as he called her “My lady” while making sweet sweet love to her heavenly body.

“I want to aerobicize with her!” muttered Rhombus as his jaw dropped at the sight of the blonde’s succulent breasts that he wanted to bite. Rhombus enjoyed watching pretty women “Bleed”, especially while pogo-ing them to Meshuggah.

Red smoke came out of the cracks in Axl Rosenberg’s outdated white plastic MacBook. It was only stable with three browser tabs open at a time. A silky smooth, shiny milk-skinned leg emerged. Axl wanted to lick her feet.

“I am Freyja, goddess of love and fertility. Are you the chosen lust-filled giants of men who I seek?”

“Which of you little maniacs wants to do me first ?” purred the Nordic goddess as she glanced at the small packages of the MetalSucks politburo.”Choose or perish!”

Vince Neilstein walked up, kissed Freyja, shoved his tongue down her throat, and grabbed her by the pussy.

“Give me your chosen seed you three. Grant me this and I will make you the vanguards for which to lead the revolution against the oppressors who worship me. The chosen people will fertilize the master race to create a new world order where all men are created equally mediocre. The hash will grow from the trees, the dreads will flow like water, and the proletariat we create will be sovereign over the entire Earth!”

Vince Neilstein entered Freyja and her “Gold Walls of Heaven” walls immediately extracted from him what they had entered the third dimension for. Axl Rosenberg and Emperor Rhombus used her divine mouth and rectum. They all rotated freely. The MetalSucks Politburo had become human anglerfish for a divine Aryan goddess.

They continued like this for almost a week, sustained only by the Gemanic nectar flowing forth from Axl’s outdated MacBook and their own lust. Mating with the Norse phencyclidine goddess had schizoidally replaced social justice warring as MetalSucks’ new reason for existence. Sloppy seconds gave way to sticky, slickness as they were slowly soaked in lovely angelic ecstasy over the course of several days’ lust.

Days later a crash suddenly came. Vince Neilstein’s wife had used her massive amount of excess heft to batter down the door to Axl’s tenement. Mrs. Neilstein saw her husband and his two best friends Axl and Rhombus naked and writhing on the floor. They were all thrusting away at a five foot tall pillow printed with an image of a blue-haired, doe-eyed, busty cartoon school girl lifting up her skirt. Axl’s disgusting fetish pillow that he usually slept with instead of unobtainable for him human females was stained with streaks of yellow, dark brown, and red bodily fluids. It almost resembled a German flag. 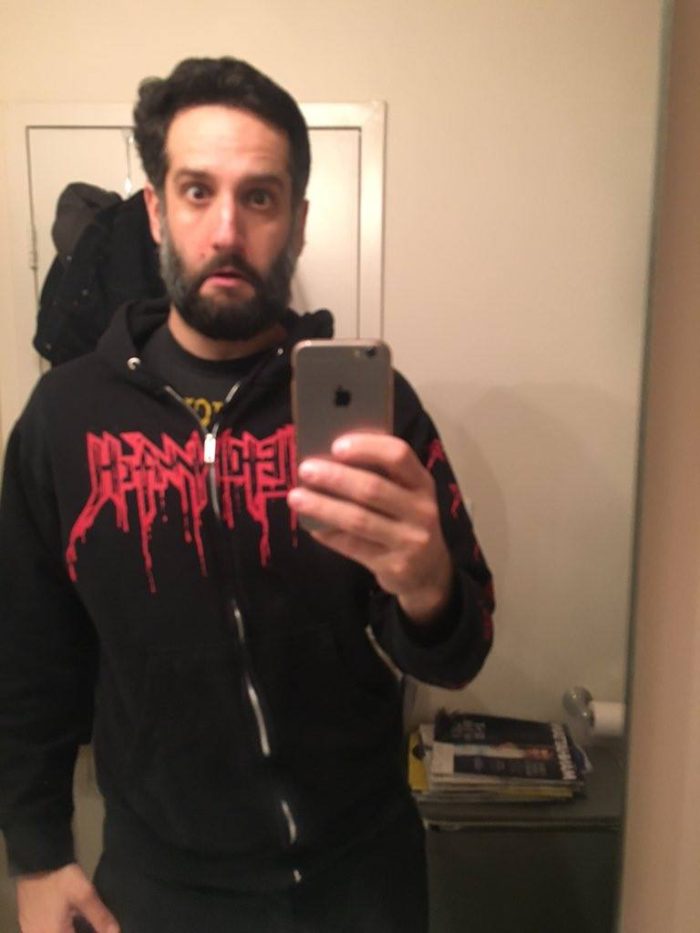 30 thoughts on “#MetalGate: The MetalSucks Manifesto”