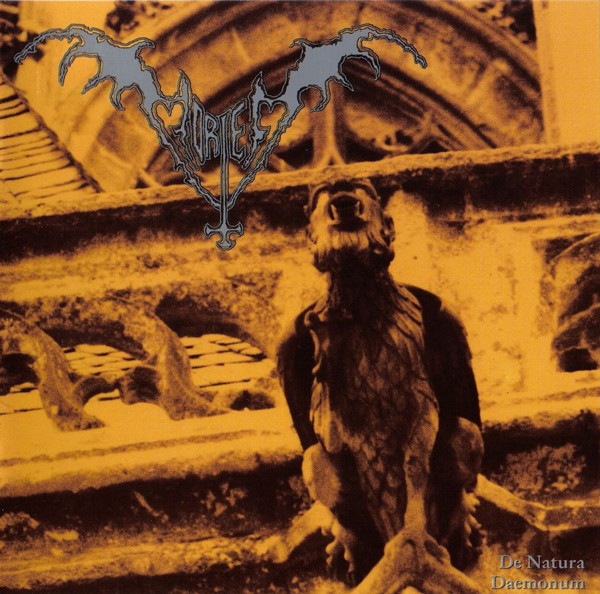 At the heart of their craft lies the creation of cathedrals of sonic texture by successful employment of the different techniques of death-metal guitar playing. The battle between drums and guitars to suppresses conventional melody, only allowing little glimpses to appear, and then unleashing it to make climaxes.

As an example, “Shadows that pray to Ashura” teaches lessons in melodic lead guitar, as the highly imaginative modal tremolo picked introduction casts long shadows that pulverize most idiotic melodic approaches to death-metal, before it descends into chromatic madness.

Throughout the album, one notices the riffocentric apprehension of the band; the focus is often on writing amazing riffs, which succeed each other by forming a monologue, on which every riff is in agreement and expounds the statement of the riff before, providing a stable architecture that allows for arabesque technical performances. However, this can be a limitation, in comparison with many great bands that allow for a more dialectic approach.1

The finishing highlights of the album are the passionate vocals of Fernan Nebiros which follow an early death/thrash approach similar to Death, Possessed, or Sarcofago yet maintain range; they sink to the horrendously low and guttural and rise into agonizing screams to accentuate the climactic parts of a song. The vocals are the diadema of De Natura Daemonum, and this is a simple way for musicians to add finishing touches to their creations.

“Its Tomb leads to Hell”: this song leads to an infernal breakdown. It is important to notice that unlike hardcore, the breakdown serves a purpose in the narrative, going deeper into the Roman catacombs to find something eldritch, which is the story in the lyrics. Usually, it might be difficult for the song to recover speed after a breakdown, a phenomenon of Musical Thermodynamics, where energy must be supplanted outside of the system, an act similar to exciting an electron which has the tendency of assuming the lowest energy stage. The problem is, that the transition to the next riff will not be smooth enough. Thus, a very useful trick is the drums that whip the guitars into repeatedly hammering, staccato single chords, like a countdown, building excitement and increasing speed to accommodate the next riff and successfully exit the breakdown.

In addition, one of the last riffs of the aforementioned song features oriental leads that complement basic chugging power chords, as a swarm of flies and it could be a useful technique to enrich a younger band’s musical vocabulary.

After an excellently chosen movie sample – also used by Funeral Mist – “Superstition” kicks in. In a past interview, Fernan has stated that Iron Maiden’s debut was the first proper metal album he obtained, a very good choice indeed. In the final song of the album, the use of double lead guitars going up and down modes. In fact, Fernan laid hands on the record some years after its production, yet the indisputable fact that he has absorbed Iron Maiden’s technique into his death-metal arsenal much better than his European counterparts, may provoke conversation about how scarcity adds value to one’s listening experience.

The writing of melodies, very much resembles Morbid Angel sans Mozart, the first being an important influence of the group. To specify, a favorite weapon of Mortem, is the Morbid Angel derived imperial and dithyrambic riff, compare if ye will, the opening of “Illusion of Blood” with “Maze of Torment” by the latter. Such a riff, if sparingly used, may attribute a classic character to a song, due to its memorability, militaristic-tempo induced awe or frenzied rhythm respectively.

Behemoth is another band that uses this riffing style, as Nergal includes Domination in his top favorite albums of all time, which bouncier idiosyncrasy probably molded the band’s later approach. While a comparison between Mortem and Behemoth would be interesting, the latter’s excessive use of melody and overindulgence, creates a high level sucrose energy drink of a songwriting. Thus, it seems that good metal echoes through time, through the voice of its epigones, and great records inspire great music. In that case, Iron Maiden’s debut appears to be a greater album than Morbid Angel’s circus, as Mortem is more faithful to metal principles than Behemoth and sound better in the long run without selling pseudoreligious gimmicks to stay relevant. This fact validates DMU’s vision, and hopefully will pursue artists to imitate the greater rather than the lesser so that they can successfully attain their dreams of creation.

As a depot of the above, the question of experimentation within metal arises. Although a grand response would require another article, sometimes containing experimentation within intriguing preludes and interludes, can suffice for the musician’s soul, and not dull the metal elements within the songs. There are a lot of excellently performed instrumental experiments in the history of extreme metal that are enjoyable in themselves; Averse Sefira’s intro on “Vomitorium Angelis” comes to mind. Similarly, within this album “Into the Nethermost” and “Qarqacha, Demon of Incest” find the band playing with captivating keyboard sounds that either grab the attention or provide breath for the listener so that he can continue head-banging refreshed respectively.

Overall, this is a classic band, with their own signature approach, which leads into excitement and porosis. The album ends ouroborically, as it begins, with the revenance of the same riff, an action of symbolic character that seals the album as a complete and classic work of art.