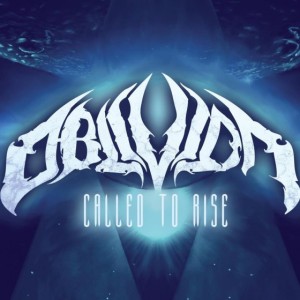 Technical metalcore band Oblivion unleash Called to Rise which offers technicality with more mood among all of the speed thrills that experienced musicians playing at top speed in a wide range of colors, textures and tempi can express.

Following in the steps of high-intensity blasters like Kataklysm and Cryptopsy, Called to Rise uses fast tempi with rapid-fingered riffs which either bat out a complex rhythmic texture of power chords or rip through a scale in a certain order, often alternating between hitting the beat on the nose and being encapsulated by it. The result is like a shifting plateau of sands and waters through which melody flickers like lightning.

In the modern technical metalcore method, Oblivion focus on great variety between riffs. A simple chug follows a silvery sweep like the dance of glare on the tips of small waves, then a bluesy lead dances over a trudging sludge progression; then, an augmented chord riff straight out of jazz-influenced AOR or funk graces a transition to fast picked single-string melodies. The result is like being driven through a museum of rock on a bumper boat, watching the sights and sounds change as you howl through different rooms.

While the essential composition is of this modern style, Oblivion includes several generations of metal. Heavy metal, speed metal, hard rock, and progressive metal feature prominently, as does classical music. First in the cover of Rachmaninoff’s “Canon in E Minor,” which is sensibly executed with strumming at top speed while note change sticks closer to the proportions of the original. Next, in a series of ambitious compositions including three pieces with string orchestra, some featuring musically unquantifiable sounds.

Where Called to Rise stays within the metal world, Oblivion is of the newer range of technical death metal which, in contrast to death metal, is composed in the late hardcore style that emphasizes contrast and exceptionalism, where death metal emphasizes contrast being part of a larger pattern in which logical parity is achieved leading to a larger context. That means the goal is for these riffs to clash, and then for another riff to take over, so that a cycling between different things is preserved.

Oblivion make this album interesting through its vast variety, and once it becomes clear to the audience that the point is a variety show instead of a penetrating observation of a limited set of musical tropes, Called to Rise can be enjoyed for the fusion of genres that it is. Its musicality and textural diversity should appeal to shredders and fans of modern technical and progressive metal alike, while its adrenaline pace of changing images carve out a place in contemporary music for a new extreme.

4 thoughts on “Oblivion – Called to Rise”