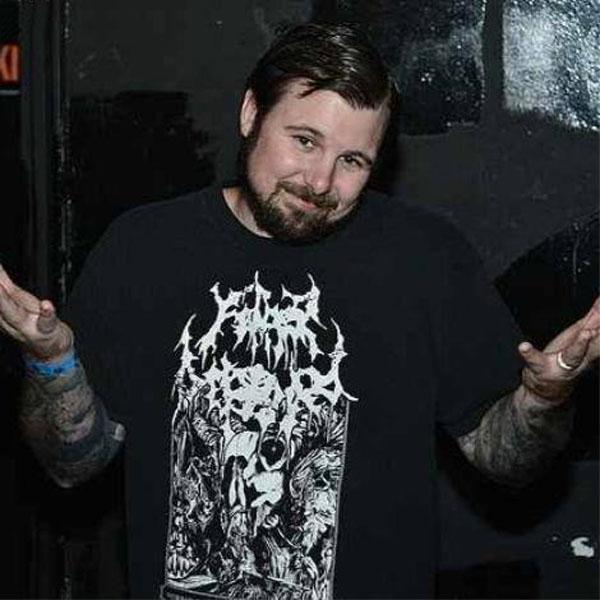 There’s a seismic disturbance in the metal world. As the power of the internet winds up, the flood of information has increased to the point where people are searching for ways to reduce the data overload. As a result, they’re turning back toward zines, reviews and edited sites and away from crowd-sourced data and social media.

On the forefront of this change is Codex Obscurum, a formerly small but rising zine from the eastern coast of the United States. Staffed by volunteers, run on a non-profit basis, and dedicated to old school underground metal as well as contemporary developments, Codex Obscurum has won over its share of devotees.

We were fortunate to be able to catch a few words with Editor Kevin Ord, who has taken over the helm. He gave us the lowdown on changes at the zine and its future direction, as well as (at our interviewer’s insistence) some speculation on why zines are surging forward as the rest of media swarms and retreats in confusion.

Can you tell us a little about yourself, and how you got involved in underground metal?

I’m from Worcester, Massachusetts. I have a wife and three cats and I’m a paint contractor during the day and zine publisher at night. Like most kids in the 80s I got into metal through other kids in school with bands like Slayer and Metallica. I can pretty much thank Headbangers Ball for introducing me to underground metal. It was appointment television on Saturday nights. I also remember getting a copy of Pit Magazine in the early 90s and being obsessed with hearing what all of the bands in there sounded like. I was already a huge fan of horror movies so the art grabbed me right away.

I like to be able to hold something physical. I think a lot of people do. I want something that a kid might find in a shoebox in 10 years and say “I remember this; I’m going to reread it.”

What made you want to work with underground zines? Have you been a zine reader for long?

I wanted to work on an underground zine because I was sick of just bitching about stuff on the internet. I wanted to actually create something instead of always just tearing stuff apart. I’ve bought zines randomly for at least the last 20 years. Reading the Slayer Diaries book definitely motivated me to make Codex Obscurum better.

To you, what defines an excellent zine? Were there any favorites of yours from the past that you still turn to as examples of underground metal zine greatness?

I think variety defines an excellent zine. We have 12 different writers for Codex Obscurum and I think that variety of opinions and tastes makes it something everyone can learn something new from. I find out about things from my own zine I didn’t know about just because we have so many writers from different backgrounds. I still turn to the Slayer Diaries like I said. He had the advantage of being in the right time and place. But I think it’s an excellent record of a specific time in metal. Maybe one day Codex will also be a good record of metal in 2013. Who knows?

Are there advantages to the zine format that newfangled ways like Twitter and blogs do not offer?

You can read Codex Obscurum on the toilet a lot easier. I like to be able to hold something physical. I think a lot of people do. I want something that a kid might find in a shoebox in 10 years and say “I remember this; I’m going to reread it.” Stuff like blogs just seem so disposable.

What has changed in the three issues of Codex Obscurum? Have you and your team altered your approach based on this learning?

Our original editor had a substance abuse problem that we weren’t aware was as bad as it was. So he is now in treatment and will not be returning to the zine. So Steve and I have taken over formatting and printing Codex Obscurum. We got a lot of feedback on issue #1 and #2 and changed the zine a lot based on this feedback. The top priority was making the zine a lot more legible and easier to read. I think we achieved that with issue #3. I also wanted to make the zine less random and more focused on music. We tried to pack as much music content into #3 as possible. Getting support from artists like Mark Riddick and podcasts like Hellcast has also motivated us to make the zine better.

The top priority was making the zine a lot more legible and easier to read. I think we achieved that with issue #3. I also wanted to make the zine less random and more focused on music.

What’s the best way for someone to get ahold of Issue #3 of Codex Obscurum? What about for them to support the zine in intangible ways? 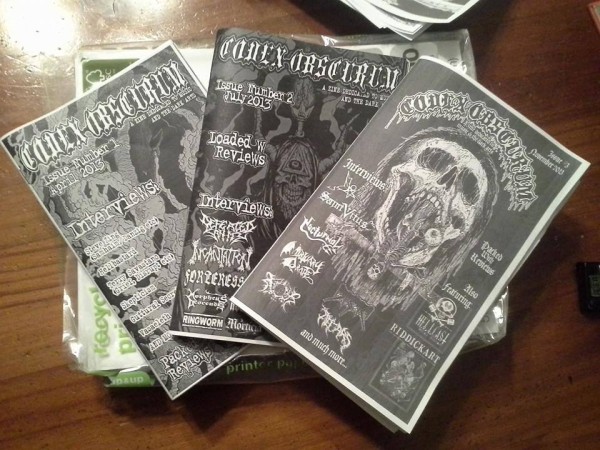