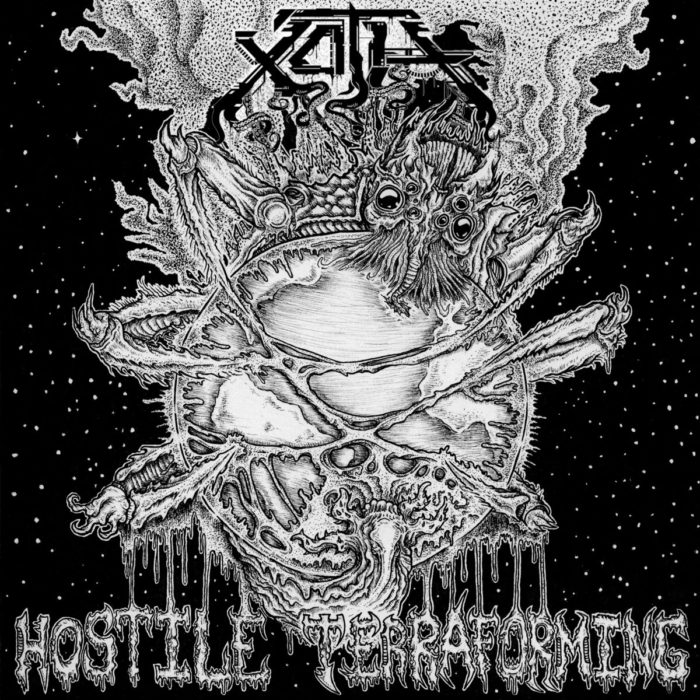 In many ways, the closest musical analog to Xoth is later Death circa Sound of Perseverance without the unique voice Chuck maintained throughout his sequential decline. The sci-fi aesthetic gives the band its quirky faux-weirdness worn ironically rather than on its sleeve like Voivod or Timeghoul who earnestly explored the genre. The result is a fun gimmick that nobody is supposed to take seriously which conveniently allows it to duck criticism. At least, that’s the pretense under which such bands operate; bereft of a point beyond booking shows for scene-signaling popularity. Nowhere is this more evident than in the vocal performances which are dispassionate and professional exercises in every genre cliché. Multi-tracked high register rasps before stop-start rhythms overlain with precision picking? Tick that box and it’s on to the next rule bound bloviated demonstrative clinic. In fact, simply watching an instructional video would be an infinitely more rewarding as one would walk away from the experience with some measure of personal growth.

A “How To” of metal is a chore to listen to in every respect because it fails to write songs that can be appreciated even as a guilty pleasure. Adjectives like soulless, vapid, or pedantic are as critically predictable and pre-packaged as anything off of this assembly line product. At best accomplishes a fair tribute to mid-90’s arcade shoot-em-up soundtracks – whose composers were probably listening to a lot of Painkiller. An album of moronic but wholly fun distillations of a completely degenerated Judas Priest being metal for metal’s sake. Listeners looking to appease their nostalgia for burning pockets full of quarters could do worse than pick up Hostile Terraforming. Likewise, those looking for something to do Wednesday night could do worse than show up to a Xoth gig – they could suffer riffless Beherit demo tribute…err…. War metal – and experience a voiceless void that temporarily distracts from the one in your soul and quite likely, in your wallet as well.