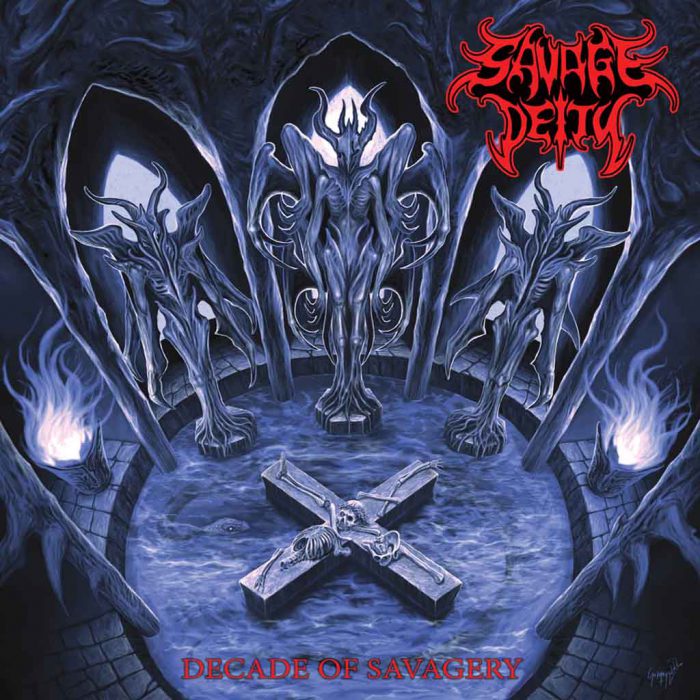 Working within the flutterstrum-tremolo tradition of early death metal, Savage Deity rip and tear through several anthems to violence on their latest release. Songs follow the “skeleton” of death metal established by Slayer, with an introduction followed by alternating verse and chorus riffs, then give way to variations in the second half of each piece before returning to the initial themes. This in turn creates the kaleidoscopic effect that the best of death metal is (in)famous for.

In style, the music is clearly indebted to Massacra. Tremolo riffs flow smoothly into collisions of power chords which serve as a method of managing momentum when transferring theme. Occasionally, a dragging, trudging, tugging riff reminiscent of early Immolation will make an appearance, taking one’s breath in the vista of destruction it reveals.

Drums frame the rhythm of each riff, allowing the best part of this music to shine through. The band keeps energy flowing by adroitly moving from a raging blast into a flickering fill, or slamming to a crashing conclusion before shifting tempo. As in much death metal, the bass takes a back-seat to guitar, which has the welcome effect of placing an emphasis upon the melodic elements of the music. The vocalist largely shadows the rhythm of the guitars, and also has an odd similarity to the style of vocals found on Beherit Drawing Down the Moon.

Decade of Savagery delivers a solid listen in the ripping style of death metal as old as the genre itself which possibly contains its best output. Like the luminaries of this style — such as Massacra and Sepultura — this album may not immediately excite with its largely uniform aesthetic, but the content more than makes up for this when listened to attentively.