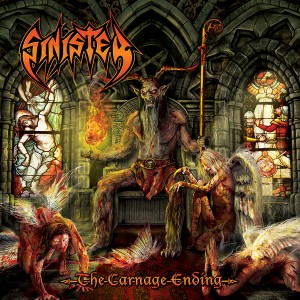 If you can imagine a hybrid between older Grave and Centurian, you have the essence of the new Sinister, which like side project Houwitser specializes in fast, simple riff-fests that evoke ancient feelings of ornamented function like the spires of historical castles.

Like fellow high-speed metal legion Angelcorpse, the songs on this album rush forward with unrelenting speed and battery but slow down for moments of melody or artfully-suggested pauses, like a knight resting on the crest of a valley before battle. Many of these riffs will be familiar patterns, not just from death metal but types of melodies famous in other ages.

To keep that from being overwhelming, The Carnage Ending features many of the fast and aggressive chromatic riffs that build tension and heighten energy in the way they did on the first three albums. While this album is not as carefully put together as Cross the Styx, and has more redundancy among riff types, it maintains its memorable moments in a sea of high-energy blasting.

The Carnage Ending erupts from a pure old school death metal background and does a more than credible job of rendering itself. Some of the chaotic material on here seems offhand, but the songs have been trimmed back so that they are expressive and not disorganized. The result is hard-hitting, raging death metal from more than one former age.

3 thoughts on “Sinister – The Carnage Ending”