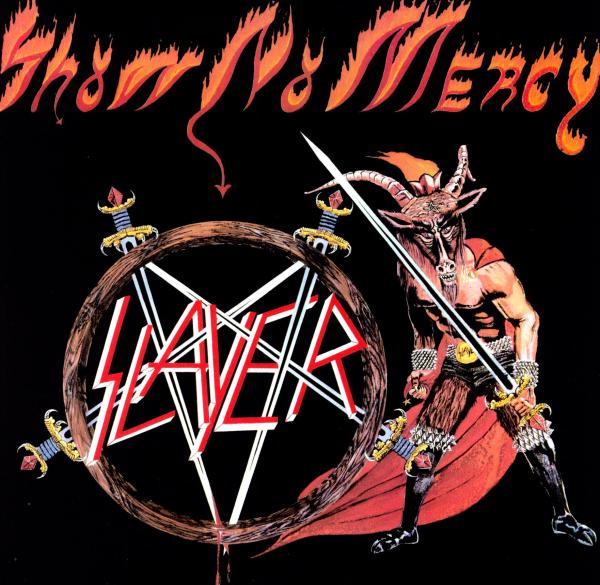 On December 3, 1983, a force of unparalleled musical terror was unleashed upon a more innocent world. Combining the high speed strum detached from percussion used by Discharge with the architectural riffing of Judas Priest and the melodic understructure used by Iron Maiden, Slayer created a new style of heavy metal which exceeded all previous efforts.

While Show No Mercy sounds tame compared to later Slayer effort Reign in Blood (1986), for the time it revolutionized metal and punk alike. Most metal of the era was still recovering from the mid-1970s slump that occurred when Black Sabbath and Led Zeppelin were hybridized into a new rock-based style, manifesting after a brief revolution in the NWOBHM as the usual lowest-common-denominator crowd pleaser in acts like Motley Crue. Slayer brought back the longer phrasal riffs used by Black Sabbath and through the tremolo strum added greater flexibility and detached chord changes from the beat of the snare, which allowed the guitar to dominate composition and relegated drums to timekeeping. This in turn gave the band more options for varying riffs within a phrase and escaping the verse-chorus pop radio song format that had infected metal in the previous years.

Even outdoing other hardcore punk/NWOBHM hybrids like speed metal bands (Metallica) and thrash (DRI), Slayer created a fury that could also be beautiful. To this they added a mythological view of humanity and the ongoing collapse of Western civilization, placing us into a mode of viewing it as a conflict between good and evil with the prize being survival more than a spiritual state of obedience. In doing so, Slayer laid the foundation both musically and topically for the future death metal genre, while also spurring speed metal on to greater intensity. Most of what we cover on this site would not have existed when it did without Slayer and contemporaries such as Bathory, Hellhammer and Sodom who opened the gates to this new style.

6 thoughts on “Slayer – Show No Mercy”