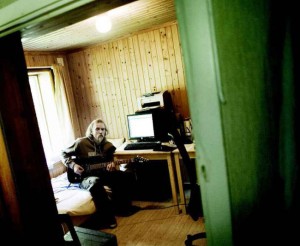 White noise lays the foundation for this track as various elongated beeps come and go. A slow lingering atonal motif formed with the beeps and white noise. Unfortunately, nothing is built upon this foundation as we are simply treated to a combination of white noise that plods along for several minutes and random beeps. Deeper buzzing sounds erupt as the music becomes somewhat more active and, eventually, a jarring sound sits atop of a lone stream white noise as synths appear underneath playing an almost Burzumesque melody. The music ends on a bizarre melody that stops abruptly and unexpectedly.

The present piece evokes the feeling of drifting through space but lacks momentum as the basic melodies are not developed enough. Sometimes there is only texture while at other times there are actual melodies pulling us to a distant planet. The composition would shine through the beeps and sounds by focusing on a smaller selection of sounds, establishing a language from that selection that escapes conventional harmony, and making sure that each section contains musical content of some form and not just random sounds. The potential to be found here could be developed if the composer could focus on building from the intro, but for now it doesn’t grab the listener’s attention and fails at creating a space voyage.

Instrumental black metal from Venezuela with a penchant for slow and sorrowful melodies. Surprisingly well-produced for a bedroom project, the drums sound full and the bass pierce through providing power in the low end, even if  at the expense of clarity when it comes to the guitar. The last is especially significant given that the guitar and bass mostly play the exact same notes, resulting in the guitar sound blurring into the bass.

Drums furiously pound away as the main motif comes blasting through minor-scale tremolo-picked power chords. The main motif transitions into a slight variant and meets cymbals crashing as it settles a longer version of the first iteration. This drags on until the drums play a tribal beat and the melody deconstructs itself. The guitar plays a syncopated riff that builds some form of tension as if to signify that the time for sadness is gone and now is the time for actions to speak. Where a vicious and uncompromising riff would have fitted perfectly as the tension built up, we are instead treated to the same motif as before. A surprise stop as the guitar drones on while a clean guitar plays an arpeggio. The song halts and falls into gratuitous melancholy, a passage seemingly inspired by hipster rock. The song ends with the drums playing alone.

There is obvious songwriting acumen present as the song flows well, but atmosphere has taken precedence over actual songwriting which should never be done in black metal. Irillion should go back to the early black metal records and see how sorrow was conveyed musically. There needs to be more contrast in those long melodies that are very well executed but lack variation. There is no need for those slow arpeggios at the end, you have to take that wave of momentum and ride it to the end. Enjoyable yet forgettable, this is good music to have as background noise while thinking or reading but lacks the power and strength to draw all the attention that black metal should demand.

Although both songs fail to meet the high standards set by DMU, both musicians had the courage to allow their works be dismantled and dissected, & for that they should hold their heads up high and go back to the drawing board. It is only by surpassing themselves that they can hope to create something unique, & I hope to hear better music from them soon. If any other musicians are willing to send their music we may host another contest soon.