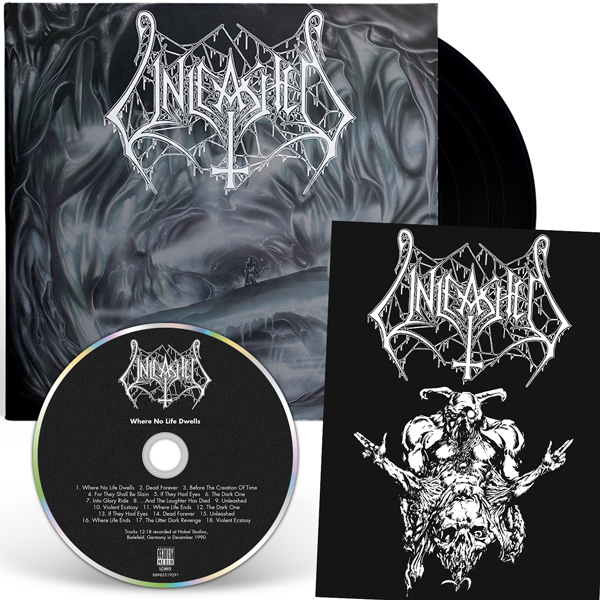 Fans will be able to purchase Where No Life Dwells and experience Unleashed’s blend of NWOBHM and crusty Swedish death metal in a dual format package conveniently containing both the LP and the remastered (more louder) CD from 2001.

Back in the late 80’s, a Swedish underground death metal band named Nihilist turned into the breeding ground from which two big players of the genre emerged: Entombed and UNLEASHED. Together with Grave and Dismember (R.I.P.), these bands are crucial for turning the punkish Scandinavian death metal sound into a global phenomenon, defining and refining its stylistics, and making it a successful genre to the very day. Parallel to records by Asphyx, Tiamat, Grave, and Morgoth, UNLEASHED’s debut album Where No Life Dwells was one of many all-time-classics of death metal released in 1991 via Century Media Records, and celebrates its 25th anniversary in 2016.

This is a perfect opportunity to bring back this timeless and gloomy masterpiece as stunning vinyl edition offering new fans the chance to discover a true classic. Featuring a re-creation of the original sleeve design, top notch vinyl mastering by Patrick W. Engel / Temple Of Disharmony (Possessed, Iced Earth, Paradise Lost & many more) as well as attractive bonuses such as a poster and CD version with seven additional tracks recorded in 1990 (taken from the 2001 CD re-issue), Where No Life Dwells remains a landmark album by the long-running Swedes. Enjoy an utterly dark milestone of death metal!

All maniacal collectors please take note that due to the fact the original silver sleeve was harder to re-create than expected, there are 150-200 units across all colours circulating which lack this silver effect. Call yourselves lucky if you have one as these are the rarest vinyls out there.

5 thoughts on “Unleashed – Where No Life Dwells Vinyl Reissue”