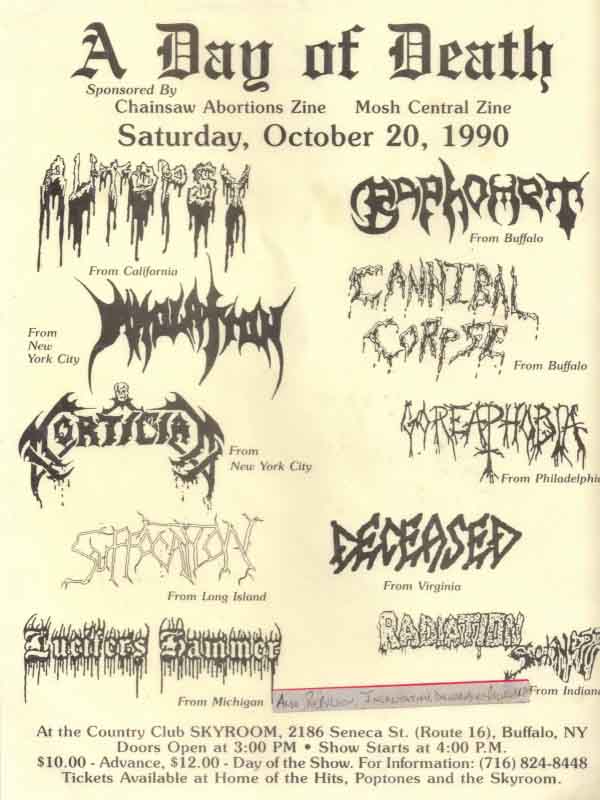 The Glorious Times team recorded the “A Day of Death” concert from 1990 and made it available as a free download in MP3 or FLAC format. Basically an abridged version of the show, A Day of Death 1990 shows founders of the underground at their best.

Opening with Autopsy, A Day of Death 1990 begins with “In the Grip of Winter.” This version sounds rougher than the Mental Funeral variant that later became the norm, and more like an earlier recording I’d heard on an EP. This is followed by Repulsion banging out “The Stench of Burning Death” (later found on Horrified) pretty much exactly as it is on the album, which fits with the band’s reputation for being immaculately rehearsed. After that, Deceased lights up the soundboard with “Decrepit Coma,” which is tightly played but loud owing to the recording conditions.

After that, the first of two Cannibal Corpse tracks comes up; Cannibal Corpse are one of those bands like Venom, Pantera, Cradle of Filth and Meshuggah that strike me as historically important in popularizing a genre but perhaps culpable in eroding its meaning. Incantation follows with both “Profanation” and “Unholy Massacre.” These are live and a little unsteady and without the bass-intense production of Onward to Golgotha, which reveals these songs further but makes them even stronger as they stand up without the intense sound. After that, another Cannibal Corpse song and Deceased with “Haunted Cerebellum,” which is the really catchy song from their first album and is executed with potent verve and energy. Another Repulsion song, “House of Freaks,” which was not on their album, follows; it is more uptempo and a bit more hardcore than death metal. The set finishes out with Autopsy and “Severed Survival” which is a more deliberate and menacing version of this messy death metal classic.

This live album is great for three reasons: first, it’s a glimpse into the history of this genre with some of the most active players visible; second, it’s done in true underground style and given away free, since these bands have the albums to sell to finance their bands; finally, it’s killer and you’d buy it anyway even if it were $15 and said RELAPSE on it. A Day of Death 1990 is more like being at the Smithsonian Death Metal Hall than being transported via time machine, and it doesn’t sound its age so much as sound the level of equipment available, but it shoves forward these classic recordings in a way that makes death metal both more obscure and more accessible at the same time.