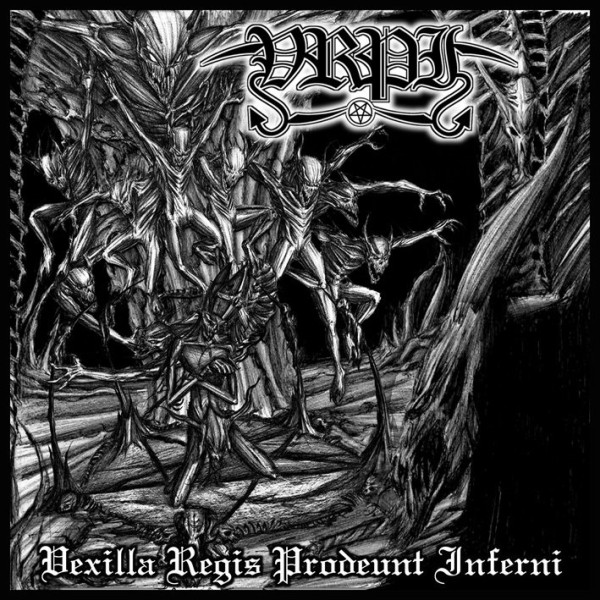 To make meaningful commentary on a band like Vexilla Regis Prodeunt Inferni, or any other band walking the old death metal tightrope for that matter, one has to hear them in context with the specific niche in time that their sound occupies. Execute a bit of nifty time-travel in the mind and place the band concerned in the august company that it aspires to keep. Observe if it compares favourably with at least the spirit of the originals in terms of aspects like general coherency in songwriting, perpetual will to forward motion, and, above all else, that ineffable, visceral reaction that only the very best are capable of evoking. Originality in this cloistered paradigm is a disingenuous word; what the avid listener hopes for is a transmission of the same vitality that informed the heyday of this music.

Vexilla Regis Prodeunt Inferni posits no claim to innovation but that is no crime in itself. Incantation, the bread n’ butter of modern death metal, is frequently referenced in the use of flowing tremolo lines plucked from the chromatic scale. While there is nothing inherently wrong with the use of atonality in death metal – it indeed comprises much of the bedrock of the genre – it also becomes something of a cop-out in the hands of lazy bands that lack the creativity required to compose tastefully and in accordance with tradition. Vexilla Regis Prodeunt Inferni aren’t an especially lazy band and are perfectly capable of constructing riffs according to harmonic conventions as heard in the more black metal-inspired sections of this album.

Where Vexilla Regis Prodeunt Inferni falls hard is in arrangement. Songs rarely build up to any kind of crescendo, even compromising whatever momentum may have been built up initially. While any topography consists of peaks and troughs, there appears to be no aesthetic meaning to Vexilla Regis Prodeunt Inferni‘s contours. Riffs rise and fall like waves on the ocean but without any of nature’s geometry, and what results is an album that touts itself as Satanic death metal but feels curiously void of life’s irrepressible energy.