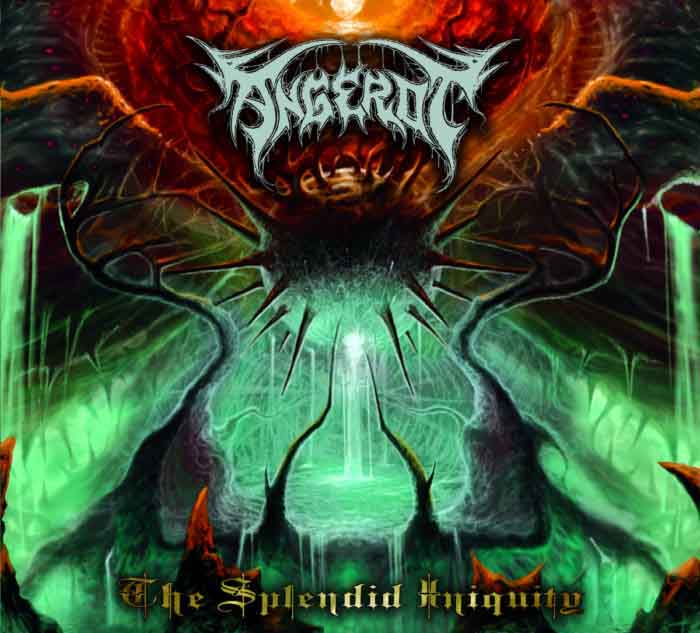 To be honest, I had a difficult time concentrating on this album. It really did not hold my attention very well and there were several facets to the music that actively drove my attention away from the music. The band uses some middle eastern sounding scales at times, but it does not seem to have any reasoning behind it other than, ‘well, this sounds cool, lets slap this sucker in somewhere.’ The production sound is intentionally old school in a very deliberate way… but that combined with the HM-2 distortion ends up making the low register guitar sound like gravel on the undercarriage of a car and the mid and high tones sound like whining. Neither is a good sound for death metal. There is a multitude of different vocal styles – black metal hiss, old school death bellow, different and somewhat better old school death bellow, a growl-y bellow, and a clean chanting that reminds me of “Meat Sandwich” by Gwar. None of them are particularly appealing and all have been done better elsewhere. Some layered vocal parts are scattered through the album, more for the sake of form than anything else, and they all make me look forward to the end of the parts with layered vocals. There are some slower parts that are not really slow enough – the tempo range on this album is quite limited and it all hovers around a very rockish mid-pace – and a few of them make me wish I was listening to Onward to Golgotha. The album ends with a mid-tempo mosh breakdown that I’m pretty sure I heard before on Chaos AD. The only thing that didn’t actively annoy me at some point was the drumming; it is present on the album, doing everything exactly as expected. In the context of this album, not a bad thing, but certainly no compliment for a death metal album.

There is a smattering of redeeming features to this album. The few guitar solos, “Deliver Us” and “From the Pit to the Apex,” were pretty cool. Harmonized with nice tone and some interesting melodicism – like finding an advanced piece of technology being used by a stone-age tribe. If the band could insert more solos and figure out a way to construct songs that logically built towards them they would be moving in a good direction. The band does best when it is using some shambling, off-metered riffing as on “From the Pit to the Apex” and “That Hath Awoke.” “Rivers of Chaos” combines these two strengths to create a pretty nice little intro.

There is endless Boss HM-2 worship on their FB, Instagram, and Bandcamp pages. The album was recorded, as far as I can tell, in South Dakota but then sent to Sweden so Tomas “Mother May I CCCP” Skogsberg could mix it. If you have an authentic piece of music that you believe in, why do you need to dress it up with such tokens of ‘authenticity?’ Perhaps they are compensating for the fact that they are selling foam trucker hats and women’s yoga pants on their bandcamp page. Or the fact that they seem to be advertising that they buy pre-ripped denim clothing. I may just be an old man yelling at a cloud, but in my day you had to earn those rips the hard way. All in all, it appears that with Angerot we have the death metal equivalent of the Kensington Runes on our hands.