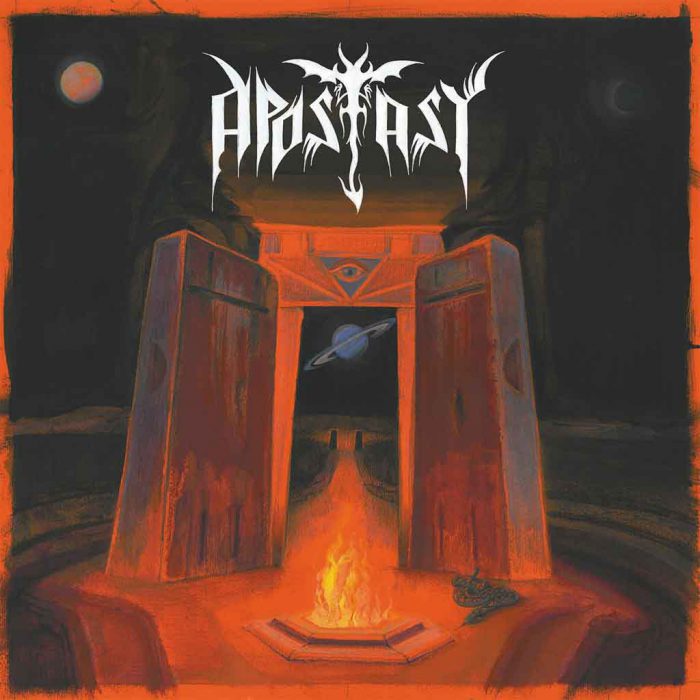 Hailing from Chile, speed metal band Apostasy returns in 2018 with a release that shows the blossoming of ideas developed during the last decade. Rooted in the genre stylings of the end of the eighties and beginning the nineties, Apostasy manages to sound fresh in The Sign of Darkness. Moreover, while still living within a stylistic paradigm of the past, they manage to find recombinations that are musically satisfying, even if barely, by their convincing central percussive line and emphasis on making variants within rather simple structures. Apostasy does not excel at developing musical ideas past climaxes, and rather just reemphasize the same ideas towards the end with perhaps slight variants introduced. However, the emblematic tier of those climaxes, and the power of their singular ideas, are nurtured in pieces of singular personality. Songs do not appear to follow any set template and display the character of organically, yet carelessly, derived pieces that were the result of the composer’s caprice, rather than an effort towards perfection. This shows innate talent, but either laziness or lack of character to follow through with what the music needs.

Highs are quite high in The Sign of Darkness and lows, while not fully disappointing, are underwelming. Heavily muscled songs like “Satan Ascends,” “Witching Fire” and even “Armageddon is Near” show compact, penetrating speed metal grounded on recognizable yet personalized statements characteristic of the genre; “Virgin Sacrifice” is a throwback piece at the more thrashy and meaningless side of the eighties style; “Blackened by Lust” is almost a radio single with great riffs and amazing flow but myopic horizon; and “Strike of the Tormentor” is an incongruous and unconvincing stitching of weakly applied cliches. Additionally, the intros and interludes are a poor excuse for airtime. Instead of being proper compositions, we get a thin track with some guy whispering over it (“Praise of Darkness”), a musically passable and adequate interlude that could use development (“The Great Damnation”), and one of those useless and meaningless bass solo intros (“Serpent Spell”). In short, the most outstanding songs in the album are those that do not appear in their 2016 EP, The Blade of Hell.

Comparison with the great Ripper is inevitable, and interesting parallels and differentiations may reveal important facts. The first thing we notice is that they compliment each other’s strengths and defects. Where Ripper’s songs are virtually indistinguishable from each other, and perhaps even unrecognizable, Apostasy’s songs have a strong sense of personality, and strong, unique, almost thematic statements that define them. On the other hand, Ripper’s songs are full and lean towards crafty elaboration, giving their facelessness the weight of narrative eloquence, which ultimately counts for more in the long run than the impact-based, atmosphere oriented pieces of Apostasy. In the very end, however, it is difficult to fully recommend either. Completeness is not achieved by either, as even Ripper’s sense of narrative is never elaborated so that a great, distinct narrative curve can be distinguished as convincing or leading to a distant yet justified conclusion, which would indeed provide ‘personality’ to the song without having to rely on catchiness.

Given the mixed result within a great packaging, material and ‘ideological’, one wonders if the band should have waited another year or two to build two more ideas, and expanded their best songs into 6-7 minutes songs by elaborating on their development and conclusive sections.  The lyrics are deliciously poor Hispanic-tinged Englishisms crudely alluding to blasphemy and dessecration but, more interesting, it also shows hints of a more involved dark esotericism lingering somewhere, or mixed in by accident. If Apostasy were able to add depth to the sense of uniqueness and expressieness they imbue their music with, they would perhaps be set to deliver the best speed metal album in decades.

PS. After multiple listens of my purchased copy, my listening of the album has been cut down to tracks 3, 4 and 9 —the aforementiond worthwhile songs in the album. Two of these figure as singles or samples on Fallen Temple’s Soundcloud. Essentially, this release has the relevant content of a good, yet not overwhelming, 15-minute EP.