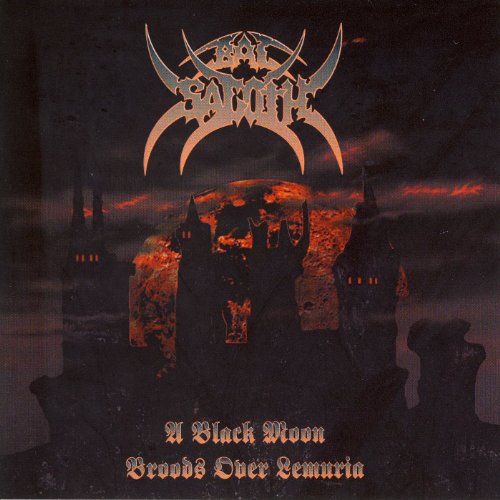 Floating between between Floridian Death metal and Black metal in the vein of Emperor with a large dose of the more percussive elements from the New York style. Bal-Sagoth do manage to fuse these elements in a combination that remains mainly in the aforementioned black metal style. An important element that would dominate later releases is the spoken word of Byron Roberts. Obsessed with reciting his long lyrics inspired by the fantasy books that he was devouring, Roberts will at times create a hostage situation where the music is on stand by and loses all the momentum built up, so that he can ramble on and the compositions can’t progress until he is done. Though his perfect diction and deep voice do keep in line with the aesthetics provided here, they add nothing to the music and kick the compositions back to the droning political punk where the music was just the backing track for the vocalist’s tirades.

«A Black Moon Broods Over Lemuria» shows the issues with the jarring juxtaposition of spoken word over a bass guitar and a synth that is sandwiched between actual moments of Death/Black metal in the most obnoxious of ways possible. There is no lead up as this section follows the modern metal method of transitioning from one idea to its polar opposite.

The compositions do reach powerful climaxes as seen on «Dreaming of Atlantean Spires» where the guitars and keyboards come together, but what this band is practically incapable of doing is concluding any of their compositions. Either they take the grand climax and ride it further than the momentum generated would allow, or they just randomly end without any conclusion on an idea that is creating tension and is building towards a release.

The transitions between what seems to be contradicting ideas, is perfectly handled when the songs are not held down by their multiple problems. «Shadows ‘Neath the Black Pyramids» leads with a strong percussive breakdown that then deconstructs the melody into an Autopsy like dirge that eventually finds itself exploding into a long tremolo picked melody to conclude the track. The band manage to glue such elements by essentially using a very small palette of note choices that can be rearranged into any sequence with ease, depending on the needs of the song. By restricting their note selection, the listener is always aware and can follow the new melodies as they carry over information from the previous melody. There are never more than three motifs in any song and each motif is similar to the others contained within the song. This allows for more variation in speed, rhythm and technique. The motifs are long but focus on specific intervals that will twist and turn while maintaining their character at any moment of their appearance during the compositions. This allows Bal-Sagoth to force the music to obey the whims of the lyrics, which may work at times to evoke the imagery of such long lyrics in the minds of the listener but is ultimately the greatest weakness of this album.

The lyrics are in no doubt what separates Bal-Sagoth from their peers. Continuing the tradition of British metal bands, Bal-Sagoth write long, verbose lyrics that showcase various metaphors,comparisons,similes and a large number of techniques that are used by writers. While Byron Roberts shows his superiority in regards to the level of his writing, what adds power to the vocals is the cadence of the words as unlike a lot of Death metal where the lyrics tend to be a somewhat loose form of prose. The lyrics here show alliteration,assonance and consonance and are very well exploited in creating the vocal patterns and despite the nature of the growl to be almost indecipherable by ear, the poetic is felt without needing to stare at the lyrics. Unlike obvious influence Martin Walkyrier, whose lyrics were not only very well written in a similarly complex style but were very witty in dealing with themes of belief, sexuality and disillusionment. Bal-Sagoth’s lyrics end up painting a convoluted image that was already fully expressed by Slayer and mixing such a vision with the philosophy of Sacramentum and Emperor. Essentially diluting their message in favor of adding fantasy and «D&D» references.

There is something endearing about A Black Moon Broods Over Lemuria due to its large number of faults and strengths. It is an album that should be listened to at least once with an attentive ear but due to these errors, it is unfeasible to enjoy this on a regular basis. This album tried to expand on specific norms in a genre that was beginning to die as various bands were jumping on the wave of popularity and the better bands had already burned out at this stage. There is a lot to be found for musicians that seek to merge disparate styles with an emphasis on story-telling like this record did. Bal-Sagoth created something unique that not even themselves were able to effectively master and have planted the seeds for something truly great to emerge from such techniques. Though this album fails to achieve greatness, those who are willing to reap the grain found here will surely forge their own path in what has become a wasteland of a genre.

6 thoughts on “Bal-Sagoth – A Black Moon Broods Over Lemuria”