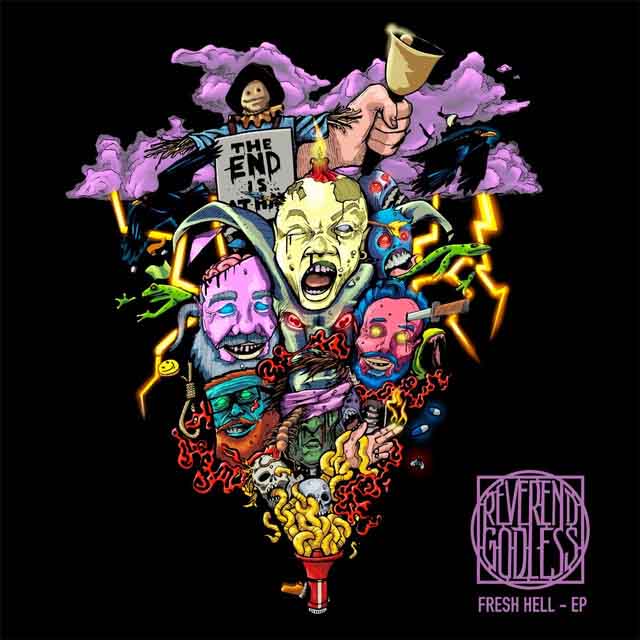 Reverend Godless take a light-hearted bardic approach in creating these narrative songs that take a bizarre mixture of traditional Balkan music played on the electric guitar while adding Folk rock, Country and Metal influences while barely incorporating any violins,fiddles,flutes,mandolins or similar instruments. The lyrical themes are all taken from Metal as songs deal with Suicide, Defiance, unholiness and conflict in general. The base of this music revolves around chord progressions picked on the offbeats with the higher notes highlighted. Unlike Reggae based styles, the band go through longer chord progressions that they will use throughout the rest of the song in multiple forms. Pentatonic melodies and tremolo picked melodies colour the chords while streams of power chords provide contrast.

The arrangements focus on a main melody that allow the singer to tell the story before then leading to a tension building section that may go into a chorus or to where the band excel which is the Metal inspired extended instrumental sections that play with one of the previously established themes in all manner of ways by harmonizing on top of it,transposing or slowly modulating to lead back into the main melody or leading to an extended chorus before ending on a new iteration of one of the motifs. This is best seen on “Repent!” when the tension is built and the piece climaxes on the extended chorus before introducing the fast paced tremolo melody perfectly ending the song.

The downfall of this short record is the lack of apparent coherence at times as new ideas are randomly introduced and break away from the feel of the song and the strong presence of cliche Country passages that take away from the potency of songs like “Coward’s Relief” after the brilliant instrumental middle passage. Reverend Godless have potential for creating narrative and epic music but most focus on giving life to their gruesome tales without falling into the temptation of cutting the overall flow and should focus on pushing even further their ideas. A good listen for those who feel like listening to amusing Folk based music without resorting to bands like Finntroll or Korplikaani.