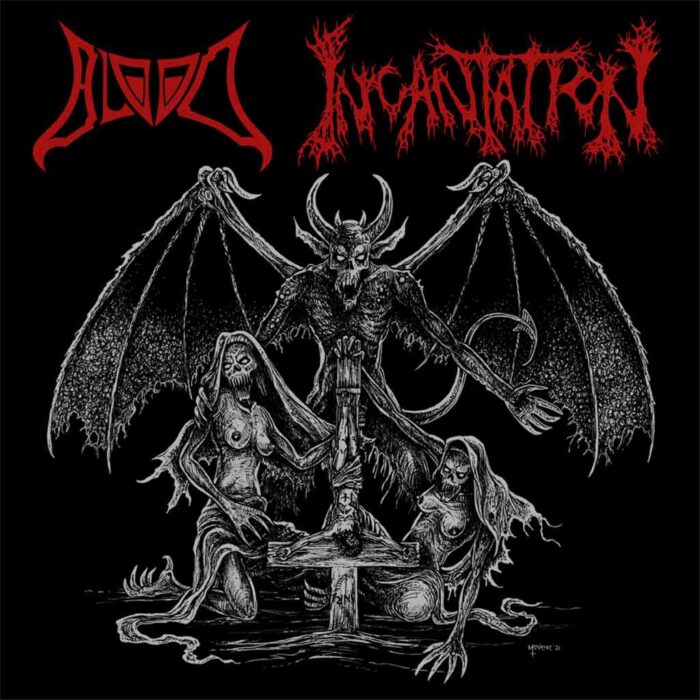 In its earliest incarnation, Blood created crafty riff-alert grindcore like Disharmonic Orchestra and Carbonized, other European grind that took a backseat to the UK and US versions, despite playing more with song structure and phrase. This origin has now almost entirely been swallowed by death metal.

Although grindcore rhythms work their way into these songs, the driving rhythm of death metal has mostly replaced the more chaotic grindcore, and the band seems to allude to recent Incantation and Disma in these rushing and combative songs.

Incantation, on the other hand, continues its metamophorsis into an obscure doom metal band that uses fast riffs sometimes, laying down a basic cadence — an anti-groove formed of repetition of rhythm which comments on itself internally through variation — and breaking it up with extended melodic fills.

This moves away from the Incantation that everyone will remember, the first album and EP era when songs developed from the contrast between two themes and filled in with connecting discourses that were both cryptic and produced a lingering sense of ambiguity and obscurity.

While the Blood songs bring an intense energy, it seems to dissipate like code with unclosed parentheses, ending early, and the Incantation track feels like a riff was written and then responded to rather than being directed toward a clear conclusion.

Showing us two visions of darkness, this split accomplishes both rage and melancholy with its respective bands, giving it an interesting listening arc that shows the bands complementing each other and creating together a sensation of leaping into an abyss and then contemplating its meaning.