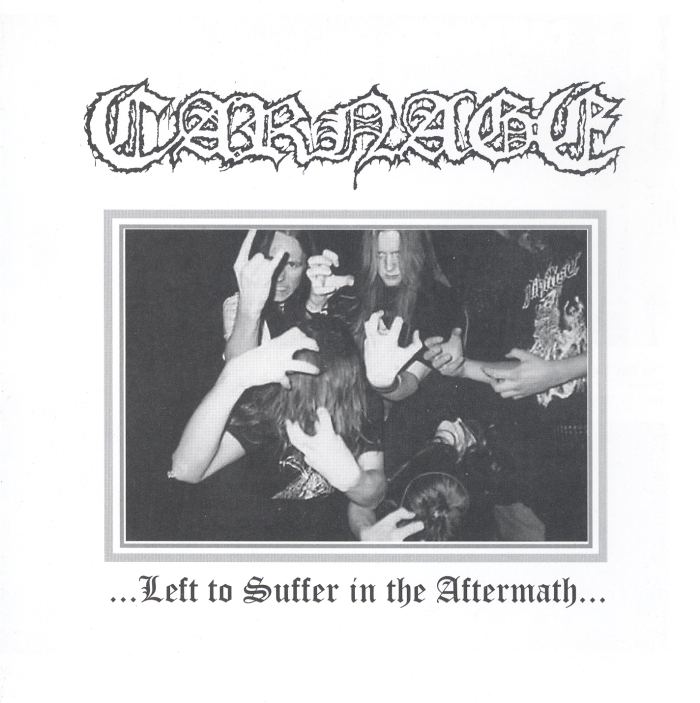 In my view, the premiere Swedish death metal releases were Therion Beyond Sanctorum, At the Gates The Red in the Sky is Ours and Carnage Dark Recollections. Those who appreciate the latter may enjoy this disc of a live set from 1990, a soundcheck from 1989, and the “The Day Man Lost” demo from that same year.

This compilation/re-issue is exactly what it purports to be: a highly competent live set of the songs in the form you remember them from Dark Recollections, a brief glimpse of the more chaotic earlier live performance, and the classic demo that is mostly similar to the album. For this reason, …Left to Suffer in the Aftermath… will be essential for no one except death metal historians and those who want a less-detuned and slightly faster version of these classic songs for the “live experience” feel. The 1990 set dominates the release with its uptempo take on the Dark Recollections songs, with little if any deviation from the album, where the demo shows the details of the crustcore plus death metal fusion barely beginning to come together. The 1989 sound check shows an interesting glimpse of this band in a more vicious mood, but peters out when it gets going, and could easily be forgotten. The demo is faithful and a pleasurable rough listen.

For almost any occasion, it makes more sense to throw on Dark Recollections, especially since the re-issue contains this same demo. The live set however conveys a certain energy that studio recordings can never hope to duplicate and is a great listen for afternoons outdoors when you want something loud and chaotic but structured, sort of like the reason that people still treasure Mayhem Live in Leipzig despite the microphone-in-Satan’s-anus sound quality. Obviously, if you are still reading, you are a Swedish death metal and/or Carnage fanatic, and you probably need this on your shelf.

15 thoughts on “Carnage – …Left to Suffer in the Aftermath…”