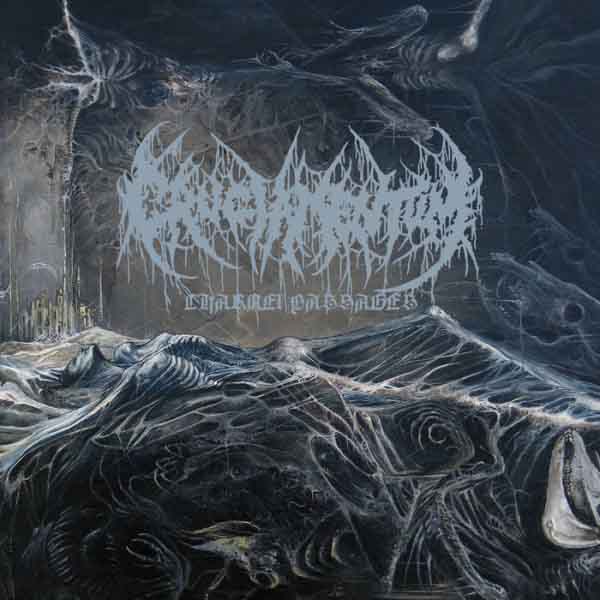 AKA Unholy Cult II. I suppose it would be unreasonable to ask Cruciamentum’s full length debut after several years of formative demos, EPs, and a brief period of disunion not to be instrumentally refined and polished as crystal clear as death metal allows; I reference Immolation’s 2002 effort not because Charnel Passages is a clear aesthetic match for it (although both are more melodic than the usual straight-ahead DM while not quite qualifying for the “melodic” buzzword), but the sense of rising formulas that could very well strangle any band.

What bugs me most about Charnel Passages is that Cruciamentum is competent. The members know how to construct lengthy, relatively varied death metal songs that avoid the worst excesses of the random and nonsensical. This puts them far ahead of most of the disorganized or simply flat acts out there. Presumably, their study of various greats in the genre has taught them how to construct riffs, drum patterns, song sections from their various influences and recombine them as desired. While they lean primarily on the percussive, rhythmically complex style of the old New York death metal scene, there are tinges of so many other contributors to death metal scattered throughout. These are minuscule at best and don’t draw much attention to their incongruities unless the listener is actively searching for them. Ultimately, it works in the band’s favor, and these incorporated influences showcase them as knowledgeable musicians passionate about their beloved death metal recordings and able to assemble new tracks with no major flaws in their construction.

However, Charnel Passages fails to rise beyond this level of stewardship. It is as if they are so devoted to imitating the great moments of the past that they are unable to build off them. In the process of listening to this album for review, I was constantly bombarded with moments where I found a transition slightly jarring, a breakdown slightly overblown, a blasting section more out of obligation than of narrative strength. Were I less attentive, I would probably not notice these, but they would still gradually push me away and towards proven classics. As a result, while it probably meets the average listener’s standards and will force its way onto many a best-of list of 2015, I expect it to be condemned to obscurity in the long run, popping up occasionally in internet discussions of “lost gems of the 2010s”. If it weren’t so close to being a good record, this wouldn’t be as much of a tragedy.

To be honest, it’s possible I may end up giving Cruciamentum the benefit of the doubt in the long run. Critics have been known to double back on their old opinions from time to time, and considering its level of quality, Charnel Souls seems like the sort of album I could change my position on very easily.