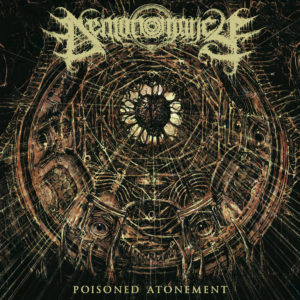 Demonomancy play a simple form of 2nd wave black metal inspired mainly by Sarcofago, Beherit and Blasphemy.  While one might expect ordinary war metal given those influences such is not exactly the case here.  Groovy Left hand path-isms and stock Covenant tremolo riffs help lengthen this release, as a tight performance is found with every instrument being clear and distinct whilst maintaining a lot of power. This is especially the case with the bass and its  ferocious tone.  The individuals of Demonomancy particularly shine within the realm of a studio recording… the vocals impress with immaculate diction and the varied transitions between traditional rasps, low growls and different variations of throat singing to achieve strong hooks.

These songs are built around a base of 3-4 Blasphemy riffs that are somewhat connected if only by their chromatic nature which are held together by conceptually weak transitions in the style of Beherit but with none of the flair or the vision in context of the song. Occasionally a riff is reintroduced but with a more syncopated rhythm to allow the vocals to change pattern. In moments of desperation, this band will resort to the same chord sequences but tremolo picked in an attempt to deceive the listener.  In fleeting flashes of slightly lessened predictability the band uses the bass and drums to create small moments of suspense and build a sense of dynamics within the song rather than the unresting assault of most war metal.

Demonomancy need to analyze and understand what made Beherit’s early albums great and come to terms with the limited language and the restricted vision of Blasphemy that is made even more apparent when the production pushes everything into the forefront.  The greatest weakness here is the transitions between the riffs that are neither fluid nor logical… the chord progressions are too short and, as the war metal bible commands, the chords are from the lower notes available on a guitar- hindering their ability to make compelling music.

Although it is refreshing to hear a disciple of the Brazilian black metal scene not equating primitive brutal music to the simple minded monochromatic screeching of Bestial Warlust and co. there are still remnants of that approach that conflict with the more nuanced ideas not unlike  Bathory, Beherit and Havohej.  While to the experienced metal fan there may be nothing much of value apart from a more melodic methodology in relation to guitar solos in black metal the war metal buffoon may find the catalyst required to branch out into other styles of black metal by offering slightly more than your basic bestial black metal band. All in all Demonomancy do have the ability to improve on their subsequent releases but for now they remain an unimpressive, average sized fish in a very large pond.