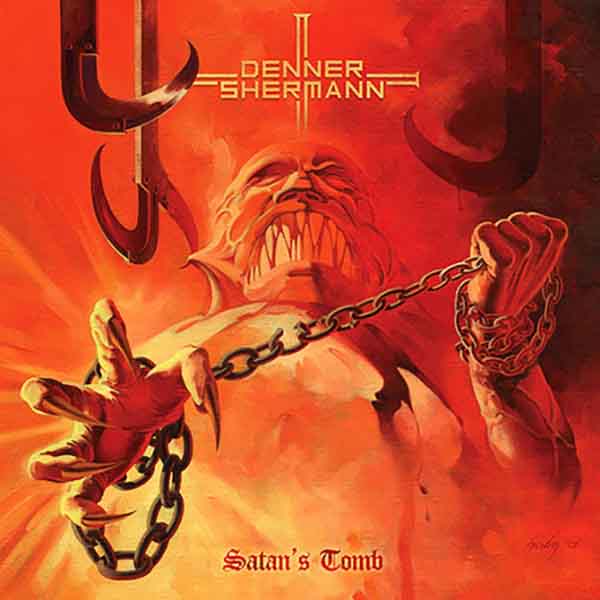 When I first became aware of this recording, I figured the obvious points of comparison would be Mercyful Fate for spawning the eponymous duo of this act, and Satan because that word was in this album’s title. Those comparisons have turned out to be less appropriate than initially expected – Satan’s Tomb draws more from recent mainstream heavy/power metal than either of those two. It’s not enough to separate them entirely from this comparison, but those expecting the second coming of Don’t Break The Oath are going to walk away disappointed for more reasons than they might expect.

What we have here is an arguably “darker” recording. There are a few overtures towards Denner and Shermann’s past in Mercyful Fate, like the harmonized guitar leads at the beginning of the title track, but musically, the members pull more on techniques popularized after the early ’80s, creating guitar sounds from a more dissonant, chromatic, abrasive source, as if the band had occasionally listened to more extreme works and allowed a tinge of their riffing style to seep in at crucial moments. The vocals also adopt a different style – Sean Peck relies on strained screams with little in the way of falsetto to make his presence known. Oddly enough given this approach, his vocals are not the prime attraction – I would go as far as to say he is subordinate to the guitarists despite his attempts to sing over them. Regardless of style, Satan’s Tomb does fairly well on the instrumental front, showing better technique and a good use of microvariation and riff diversity within its style.

The main flaw of this album is that its songwriting is particularly haphazard. One thing Denner/Shermann consistently draws from its musicians’ past is an emphasis on complicated song structures. The band members try to recapture some of this, but songs here consistently suffer from organizational problems, including one particularly ill-planned coda at the end of “War Witch”. Without anything to properly glue together more obvious transitions, songs here listen like a heap of unrelated samples, which is amusingly similar in effect to the band’s promotional trailer. More conventionally structured songs like the title track don’t suffer to this degree, but the album wouldn’t necessarily be better if it were more simply shaped. Ultimately, we’re left with a somewhat ambitious, but flawed effort – while the rest of the album is otherwise acceptable or better, structural weaknesses are, as a rule, simply too great to ignore.