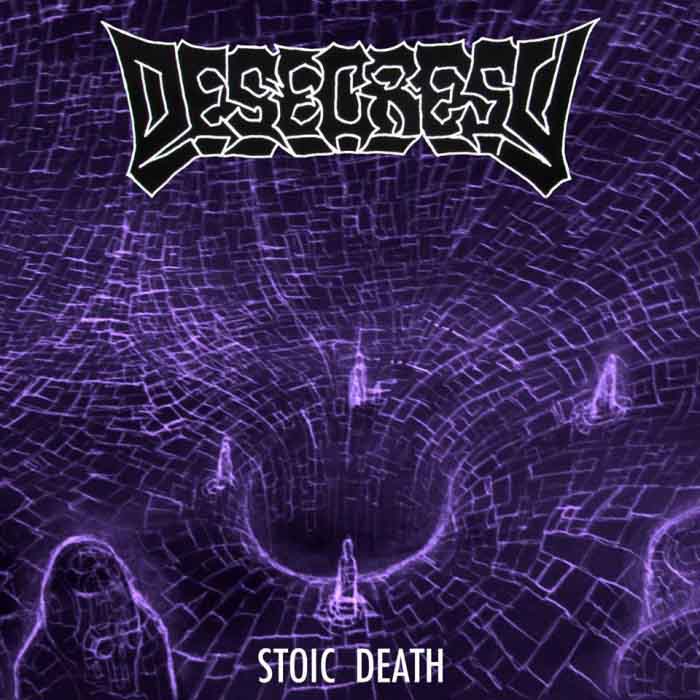 In the world of old school death metal, few manage to revive the past and carry it forward in a unique voice. Desecresy resurrects the greatness and gives it a unique spin with atmospheric lead melodic guitar droning over death metal and doom-death riffs, and on Stoic Death they increase the variety of death metal riffs and the dynamic impact of songs in a style more like that of their first album, Arches of Entropy.

Stoic Death begins at full speed and continues to vary pace throughout in order to build intensity, applying the resonant melodies selectively like layers, enwrapping the surging power chord riffs in sheets of harmonic background that intensifies at crucial moments in each song. The doom-death influence shows its strength most in the careful pacing of each song and introduction of elements like seasons, cycling to a conclusion.

The increased variety of riff types shows a familiarity with death metal of the oldest school, but now they take on a new language, with Asphyx-style percussive riffs sliding into rolling Bolt Thrower style dirges, and then emerging with the powerful Finnish-style death metal riffs anchored in melody that specialize in crucifying beauty with cruelty. The mid-paced approach might seem to kill aggression, but it has replaced that sentiment with a deepening sense of melancholy, dread and suspension of all normalcy as the bizarre becomes sensible.

This album feels like a descent into a tunnel shrouded in darkness, where as the voyager goes deeper both in the ground and behind the layers of twists and turns, the daylight world seems more remote and unreal. The songwriting technique Desecresy has made into their trademark presents challenges in that the overall sound is similar between tracks, but here the band differentiates them with elegance and creates a complexity of texture in which the listener can gratefully lose themselves.

More Godflesh influences permeate this album as do nods to recent changes in metal toward the more atmospheric, but Desecrey channel these into its own voice, translating the insipid into the ambiguous and the comforting into a threatening lack of center. What emerges from that fertile combination is a voice perfect for this time, a great sea of doubt in which glimpses of beauty are hidden behind primal uncertainty. Like the best of metal, it makes greatness from conflict and then shows the wisdom of that atavistic outlook through precisely-architected composition.