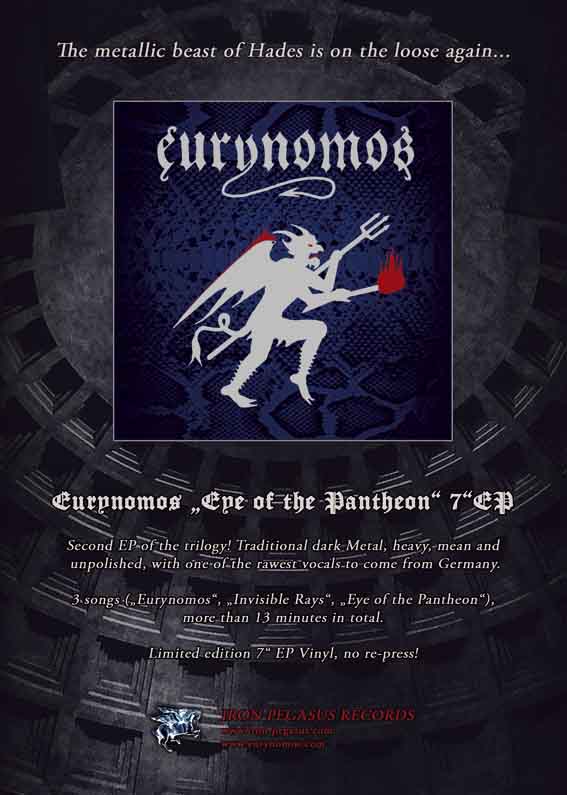 This short EP has been sitting in our review queue for a while, for better or worse. I personally didn’t know what to expect from this band, but I certainly wasn’t expecting Root or After Death style ‘traditional’ heavy metal with extreme metal technique (i.e what we call power metal in the local parlance). The specific genre probably isn’t important, but Eye of the Pantheon does fit in quite well with the nebulous “first wave” of black metal despite its contemporary vintage. Luckily for us, Eurynomos takes after the better metal in that vein by making up for its technical shortcomings with ambitious songwriting and that certain ineffable gutter charisma I find rather common in similarly primitive recordings.

A lot of our readers will probably remember how, during the last decade, Darkthrone earned some notoriety for creating deliberate throwbacks to traditional metal and hardcore punk that were too goofy and self-referential to be of much value. Eurynomos seems to be aiming for something similar, but their efforts actually end up more accomplished and coherent. The musical language is very similar – both bands employ consonant but minimal riffs, halfway harsh shouted vocals, simple song structures, and so forth. Eurynomos, though, manages to write and perform in a more elaborate fashion, hiding their verse-chorus nature with well constructed bridging material and using their vocalist more effectively. Given a style that isn’t all that technically precise, his clear enthusiasm for the material means I’m willing to overlook his awkward cadence and his slurred diction. This overall mix of pros and cons does, as previously mentioned, extend to the rest of the band, especially since this mixture of traditional heavy metal with old underground tropes does not have the greatest musical demands.

In the process of appraising material for DMU reviews (and more generally, just listening to music), I find that a lot of bands would benefit from either simplifying or complicating their material. In this case, I think that Eurynomos would benefit from being a more elaborate and technically ambitious band within their style, but what they have so far is a good foundation, and it’s worth listening to in its own right.