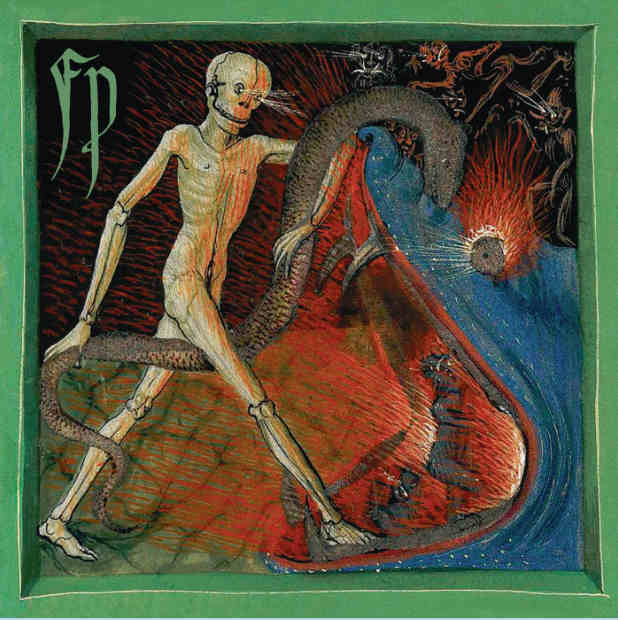 The production here immediately hearkens back to Don’t Break the Oath with reverb heavy guitars that are very present in the middle frequencies as the bass and the bouncy Rock drums occupy the lower end of the spectrum. Vocals float on top with a Bathory like snarl that doesn’t fall into the codified Black metal shriek. On certain passages we are treated to bells that work in a central role with the rhythm guitars in regards to melody instead of a supporting role more commonly seen in the genre. Synths often appear in different textures and roles throughout the album without ever taking the central role. While the overall aesthetics succeed in creating the desired effect, the digital tools used to mix and master, often betray this record as there is a bit too much compression which eats at the dynamic range and makes this a tiring listen when the acoustic guitar segments are almost as loud as the blast beat driven passages.

The melodies here are very long and follow the combination of minor scale and pentatonic that was the foundation of that period. At times Funereal Presence have no issues with pushing towards atypical melodies and dissonant intervals that uneasily resolve which gives a strong otherworldly character to a lot of these passages. The bass diverges from the guitar in the same way that Joey Dimaio constructed his bass melodies on the early Manowar records while the riffs in general show take their source from Merycful Fate, Bathory and Show No Mercy. Unlike those bands the leads follow the Iron Maiden pattern of being harmonized and then juxtaposed against the thicker rhythm guitar melodies. Funereal Presence understand the source of their riffcraft and make excellent riffs but they often follow too closely their progenitors instead of the diverging from them which is where the band reaches its highest summits.

The album is divided into four songs that each surpass the ten minute mark and often feels gratuitous in doing so. Here lies the greatest area of contention for this music. There is an excessive amount of superfluous complexity not needed within these arrangements. Every idea, no matter its role is needlessly reintroduced later on within these songs including the melodies that obviously exist only to introduce more pertinent ideas to the development of each piece. At some points all momentum is killed to reintroduce acoustic guitar segments which creates the need for another long build up that wastes time to arrive where the song was before the break. While the reintroduction of ideas and their subsequent development is the central tenet to all forms of metal, Achatius makes a mess of it through overkill. This confuses what each song tries to convey and forces the listener to recreate the puzzle by discarding the redundant pieces. The most obvious symptom of this is the finale of “Wherein Achatius Is Flogged to the Hills of Violation”. Where the grandiose chanting against the emotional snarls should have led directly to the fitting hyperactive solo, it is held down by too many repetitions and useless additions that dull the climax almost completely.

Achatius is an enjoyable record that manages to explore new ground by returning to a period where ideas and conventions weren’t yet set in stone and by offering their take on it with knowledge on what would come after. Though there is some innovation it gets held down by its inability to express itself clearly. A similar record that prioritizes the interplay with the bells and the more unique riffs while trimming all the fat in the repetition would make for a much stronger listen.