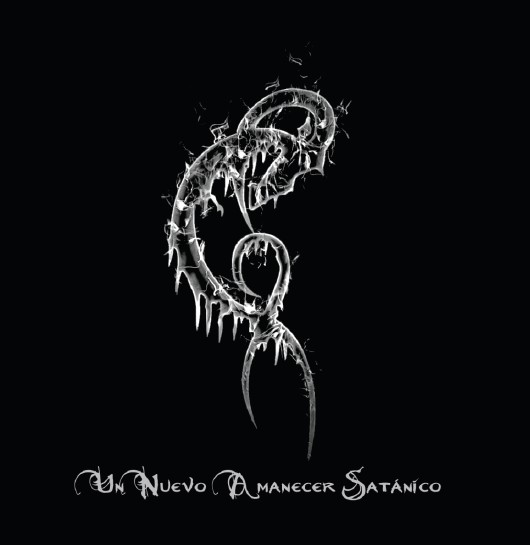 Coming back not with a reformulation or evolution of their sound but a deepening of their purpose, Gevurahel give us a new presentation of old and new compositions that fine tune their expression of satanic devotion. The musical style has been boiled down to essentials of unity and comprehensibility, letting the variation and exploration take place in a more controlled way. These designs are not random nor do they respond to a musical urge, but rather to an inner insistence upon necessity with respect to purpose. That is, the direct opposite of music for its own sake.

The style we see is one of minimal guitar lines and riffs that carry bare-bone motifs. Unexpectedly, this does not denude them of substance as it happens in the case of Profanatica, to provide a point of reference. The guitars are indebted in the best of ways, and in no explicit manner, to the innovations wrought by Tony Iommi in the earliest days of Black Sabbath, when the force behind the musical ideas were of subconscious origin. The vocals are not virtuous nor interesting in the technical sense, but they consistently deliver the necessary treatment of lyrics, their emotional counterpart and mirror the total aesthetic intended. The drums for their part, perform equally up to par and give us nothing to desire even if they do not give us cause to comment on them either.

The total is really more than the sum of its parts, which is not to say that the parts are lacking, but that they are subsumed under the intentions. These intentions cannot be planned totally, but should be kept at a subliminal level such that it is through emotional awareness and an attention to intuition that they boil forth as necessary. Satanic devotion in itself might strike our cynical tendencies impregnated with atheism as over the top or ridiculous, but upon self-criticism this arises more out of the alien nature of devotional expression in our times, on the one hand, and the belittling and distortion of a certain impulse to what has come to be known as satanism.

On the downside of the affair as a whole, the resulting album is not yet just by its own inner standards. There are subpar moments that communicate awkwardness, but these are few and far between. It cannot be helped but to take such dependency as much as one would criticize Christianity: the satanism of Gevurahel would appear to be simply an inverse, adversarial gnosticism (i.e. an esoteric Christian thought of sorts heavily indebted to Greek thought). The temporary value held by this kind of position is limited to the fact that it is to a certain, limited degree, antinomial in the still very traditional countries in which Christianity yet prevails.

Herein lies the importance of a release like Gevurahel’s, in that it is not a product of aesthetic want, of ethereal narcissism, but one of fire of realization and opposition. Unlike the American sphere, where everything appears to be theatrical and over the top, and which theatrical tendency obscures foreign expressions of true defiance to the eyes and ears of Americans because of their cartoon-based upbringing, this opposition brings constant friction with real ramifications in places where the Abrahamic religions are still held sacred.

Despite the opposition to the following ideas by Brett Stevens and the rationalists that populate ANUS, there is only one heresy in “the West” (Amerika and Europe) that is on par in danger and antinomian charge that witchcraft and satanism has in countries dominated by Judaic-derived fundamentalism. This, however will go unnamed, as obvious as it is. That the supporters of such ideologies have failed to deliver musically is no indication that the heresy, the fire and the opposition of such currents are alien to metal, on the contrary, they are very much necessary. A relevant note: esoterically, both Hvis Lyset Tar Oss and Transilvanian Hunger are permeated to the core by the deeper spirit, though not the words or symbols, of the heresy that has gone unnamed in this article.

This year, Desecresy has given us an example of monolithic single mindedness towards passionate realization. The result was almost total, but it had nothing, perhaps, of the authentically spiritual. I doubt the composer has a irrational devotion to cosmic deities beyond the “occultic” sphere of thought and purpose, and this is let through by the music. Mefitis gave us a very crafty collection of classic underground references, including plenty of structural and textural passages lifted directly from The Red in the Sky is Ours, yet once the record is over, there is nothing to remember it for. As for Polemicist, it is vaguely interesting, a completely rational approach to communicating a philosophical purpose, in short, utterly stale.

The answer, I believe, is in Gevurahel’s 2019 presentation of a vision in art. To finish of, a recommended historical impulse in these directions beyond the entertaining and the merely aesthetic is Parabellum’s compilation Tempus Mortis. A recommended reading to go with it is Anton von Webern’s The Path to the New Music, even if we disagree with the specific forms which these path of Webern’s materialized into with serial composition, or even if we disagree with the specific musical dialects put forth within the Second Viennese school. Break forth, invite madness in.

Houses of decay, mine, his and all. You told the Clongowes gentry you had an uncle a judge and an uncle a general in the army. Come out of them, Stephen. Beauty is not there. Nor in the stagnant bay of Marsh’s library where you read the fading prophecies of Joachim Abbas. For whom? The hundredheaded rabble of the cathedral close. A hater of his kind ran from them to the wood of madness, his mane foaming in the moon, his eyeballs stars. Houyhnhnm, horsenostrilled.