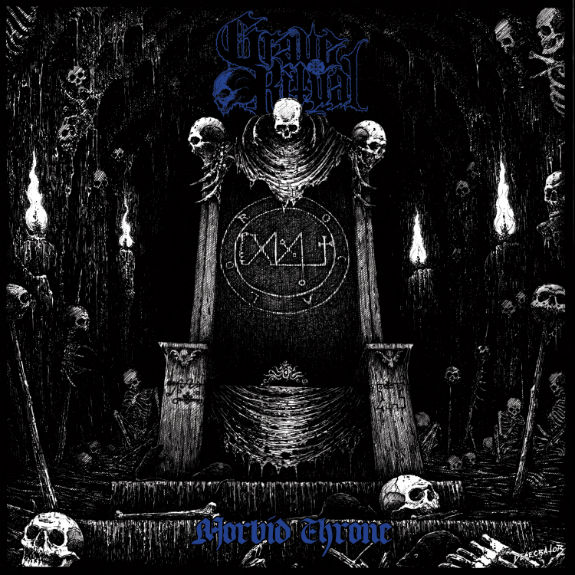 Grave Ritual released their debut album, Euphoric Hymns From the Altar of Death, on Razorback Records in 2010. I picked up the album after a cursory listen online and have been steadily listening ever since. It is based on the sort of whirlwind style of composition in which contrasting, visceral riffs are injected in rapid succession into the listener’s stream of consciousness, but the band keeps just enough pressure on the brakes to keep the songs from becoming haphazard and disorienting, and they know when to reign in the multi-directional melodic excursions and wrap up their exploration in a satisfying resolution. Grave Ritual are a well-oiled machine who are foremost concerned with playing death metal just the way death metal is “supposed” to be played. That is the strength and the weakness of this band.

Five years after their first release, Grave Ritual have given us Morbid Throne, which begins with an unnecessarily long intro track (“Baleful Aversion”) that is evidently designed to ease the listener into the aural aesthetic of the album. This is not a bad musical technique necessarily, but I find that being tossed right into the fray of warped chords and unexpected rhythmic shifts of traditional death metal is a much better introduction to the hopeless terror that is death metal’s specialty (aside maybe from an unironic ’80s-sounding synth). Listening to “Baleful Aversion” feels like I just exchanged a ticket for access to a “haunted” fun house and am leisurely strolling down the walkway that leads to the entrance, hearing electronic sound clips of spooky bat squeaks and creaking floors, passing “DANGER!” signs stuck in the nearby ground intended to give the appearance of haphazard placement and long-term neglect, but obviously carefully placed and maintained. Meanwhile the opening track of, say, Effigy of the Forgotten gives me the sense that I’ve been strapped into an unguided rocket and the engines have just ignited. In other words, there is a sense of carefulness on the part of the band to avoid getting “too crazy,” and this is the overall sense of the entire album, usually for the worse.

At the risk of using the “it’s 2015, we should be past this by now,” argument, Grave Ritual seem to be doing themselves a disservice by sticking so closely to established death metal tropes. The album is evidently supposed to sound like it was recorded in 1992, including the guitar, drum, and vocal techniques. We need only reference Immolation or Atheist to see that there isn’t necessarily an established canon of techniques that define that era; rather, it was a time when bands were pushing the limits of metal in terms of what was physically feasible to play on an instrument, and what sounds were psychologically jarring without going to the point of unlistenability. Grave Ritual play riffs with the same intervals and scales and power chords that the death metal bands in 1992 used, but they play them like rock riffs, which at some point need to cycle back to the original chord that began the riff in order to resolve. Grave Ritual, however, instead of truly resolving a section of music and allowing the next section to develop, will just drop a riff after it gets played enough times (before you can get bored with hearing it, to the band’s credit) and a new riff arises out of the same scale but in a different rhythm or at a different tempo, to give the appearance of motion and development. This means that, if you listen closely with attention paid to the beginning and ending chords of each riff, you’ll notice that the guitarists will stay on a single chord pattern for a very long time, occasionally switching up the speed or pattern of notes but only changing how the notes are played, not what notes are played.

Grave Ritual use an effective but dated method of riffcraft: 1. Pick a dissonant interval. 2. Play some scattered, atonal riff to jump between the two notes. 3. Play basically the same thing on a different place on the neck, but slower. This worked very well for Incantation, but Incantation’s music is grounded by an intuitive sense of motion and tension, probably because the guitarists knew that they had to move on to a different riff and aimed toward it, rather than milking each riff for all its worth by cycling through indefinite rhythmic mutations before the riff expires. Meanwhile, the two-chord back-and-forth riffs on “Morbid Throne” do not build tension as they are repeated over and over; their main purpose seems to be providing a rhythmic hook to anchor the rest of the inoffensive-but-generally-unremarkable two-chord riffs that make up the meat of most songs.

And hooky, they are. The best parts on Morbid Throne are very cool sounding; imagine Autopsy riffs played at half-speed while authoritative drum patterns are augmented by a very deep and grisly voice chanting spells of suicidal vengeance. It’s a dependable aesthetic formula because it has held up against the scrutiny of generations and has continued to sell in a rapidly shifting industry for over thirty years. Unfortunately Grave Ritual’s dedication to this aesthetic has made them a slave, rather than master, to it. One prime example is the guitar lead that comes in just before the minute mark in “Lewd Perversities”; we hear string bends and rapidly tapped melodies, but that’s all there is to hear. It’s just an exposition of technique. There is nothing being expressed through the technique; the only expression is of the technique itself, which is a backward way to write and play death metal.
The best death metal albums work by pairing musical sections that are unlike on the surface (being in a different key, or of a different rhythm or tempo) and then eventually tying them together by offering more transitions and comparisons until the listener’s stubborn insistence that unlike sections conflict is broken and he submits to the song as a whole rather than a collection of contrasts. Grave Ritual understand that pairing incongruent riffs haphazardly makes the music an incongruent shuffle. This lets them gracefully avoid the two major pitfalls of modern death metal; one being that overwhelming percussive impact will convince the listener that they are hearing something extremely “brutal” and the other being that “atmosphere” is the goal of any album and bizarrely-voiced dissonant amelodic progressions are the most appropriate take on a death metal “atmosphere”. For this, they are to be commended. Yet in the end, this album has no teeth. There is no sense of danger or tension throughout. The product is a death metal album designed for easy listening, and in this way, it succeeds.