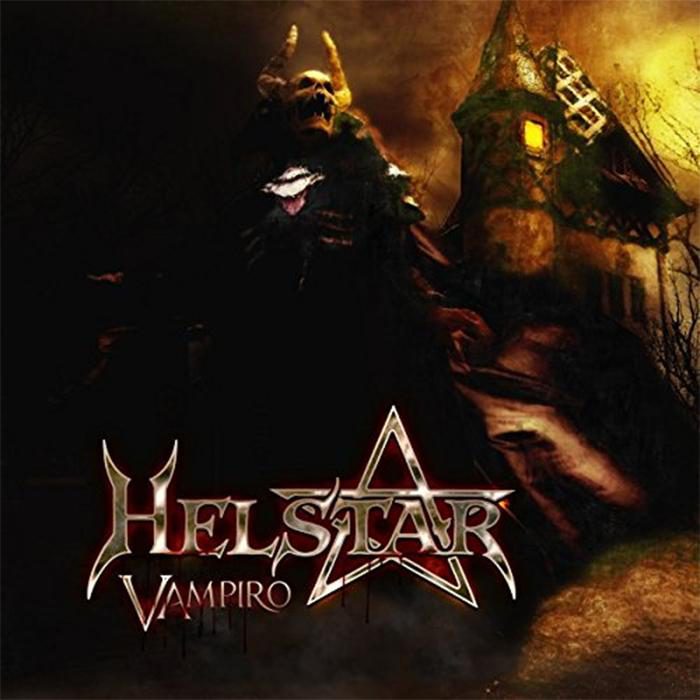 The fret-board gymnastics and Malmsteen influences of André Corbin were what the band deemed to be essential in pursuing such a venture, so to fill in the void the band brought relatively unknown Andrew Atwood. A complete return lyrically to the theme of vampires instills initial fears that this is a band accepting that they are musically bankrupt and just trying to cash in on the works of the past like many of their contemporaries. Fortunately as much as this derivative, Helstar surprise the listener with an enjoyable record that does at times capture the magic of their seminal record but is not in any way a Painkiller-esque revival.

Eschewing underground production in favor of the sterile sound that has enticed the older heavy/speed metal guard crossing over into the modern metal age. Loud overly compressed guitars that give no breathing room constantly assault the ears as the drums are far too consistent due to the samples dominating the natural sound of the kit but avoid the clicking double bass at higher velocity. The bass creeps out from the rhythm guitar to allow for its deviations to be heard but is quickly caught between the loud guitars and the drums. A lack of humanity is felt with this overbearing performance and quickly becomes tiring to listen to as this for the most part at one constant volume and suffers from the usual problems of modern records.

James Rivera’s vocal quirks have entirely disappeared from his performance as he sounds like modern Halford with dashes of Ozzy. His soaring high notes have been replaced with guttural screeches and at times attempts black metal shrieks that are very inconsistent and range from well executed when they are deeper and more guttural, to weak and and tired when pushing them out from the head register. A varied vocal performance that shows that despite his age, Rivera is still an incredible vocalist but a more controlled and planned out performance would have allowed him to both show off his abilities and to add more depth to the record.

The melodies are in the still unique Barragan scale but have been shortened and streamlined in the most part to allow for more rhythmic intensity. This often has the effect removing the identity of the riffs as they end becoming leftover Slayer ideas. Tracks like “To their Death Beds They fell” and “Black Cathedral” do manage to create long potent melodies when they push the rhythms to a minor role. The more interesting melodies all hearken back towards their source inspiration. “Malediction” takes the motif from “Perseverance and Desperation” and does develop on it in a new way taking it towards new ideas but these ideas always return towards familiar ideas that are instantly recognizable.

“Off With His Head” has a fantastic chorus but is just the chorus of “To Sleep Per Chance To Scream” reassembled with the same notes. “Repent in Fire” is just the furious opener “Baptized in Blood” but with a slight change in the arrangements and a few differences between the riffs. There are some novel ideas that are not nearly explored enough like on “Abolish The Sub” which does utilize a long tremolo picked melody in the Black metal style but then does not develop that idea. “Malediction” breaks off into a proto-death metal section where a rapid melody modulates independently of the drums.

The arrangements are at their best when they stick once again to the source material like on “Black Cathedral” and “From the Pulpit to the Pit” working entirely within the extended pop format. Though here it has been mostly simplified to intro, verse, chorus, solo, breakdown, chorus, and outro. The band focuses far too much on the advanced playing highlighted within the solos and neglects the riff underneath as the melodies are as simplistic as possible to allow for as much freedom as possible for the extended solos.

The virtuosity is constantly felt as a lot of the melodies fight to be heard against the various leads that never relent. Often like all modern metal, there is an abundance of information that may excite at first as there are interesting takes on harmony and counterpoint but due to the constant barrage, one quickly becomes desensitized to it all. These leads do diminish the emotional strength of the music and should have been used much more sparingly to accentuate certain chord progressions or to increase tension. The melodies and the leads become static as there is little room left to develop upon the initial ideas and where Nosferatu would progress from melody to melody within the extended pop format to increase tension that is then released at the solo or at the chorus, here the same ideas are set in stone and the music becomes far too predictable. When Helstar experiments with new arrangements, the results are catastrophic like on “Awaken into Darkness” which begins with a slow melody that makes way for a Speed metal burst before ending on a solo. When three ideas are stretched to over six minutes, the listener easily loses patience and this shows the inability of Helstar to reach out beyond their comfort zones effectively.

It is without a doubt that there is passion behind this release and a desire to surpass their magnum opus. Despite the many flaws of the album, there is a lot to be enjoyed. The glaring weaknesses including the chunky riffs that are sometimes used to bridge ideas together clumsily, can be removed. Helstar have lost their flair for the dramatic and have turned to a small number of tricks and obvious devices to make up for that. The length of this record is far too long for most listeners to ignore the faults presented here and is physically demanding to listen to in one sitting. Barragan and his team have failed in their primary objective but on the other hand have created their best record in a very long time. If they can figure out how to streamline their ideas while delving more into Extreme metal influences, they could produce a worthy successor to Nosferatu. Vampiro has a few fun tracks that deserve a few listens before allowing the acoustic guitar of “Rhapsody in Black” to take the listener upon an unforgettable journey.