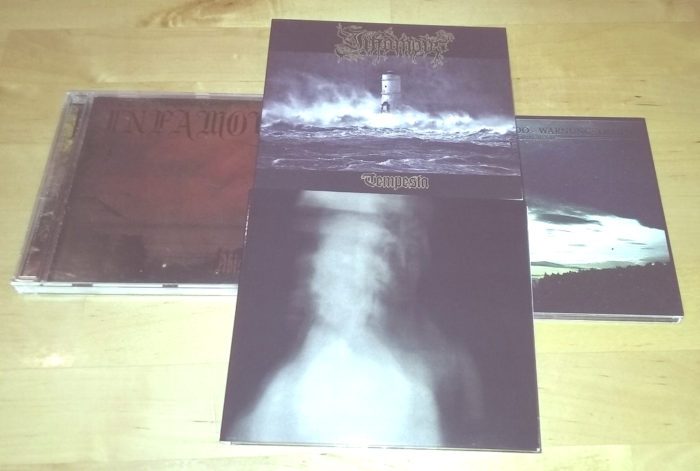 A good post office even smells like metal, with the scents of paper and tape pushed aside by the faint odor of fire and blood. Metal flows through these post offices and imbues them with some of its power. One can also feel the anticipation and excitement of getting mail and discovering new sonic territory.

Recently Infamous composer S.A. contacted me with a generous offer of a trade: a copy of my first book, Nihilism: An Unrelated Story That’s Time Consuming, er, Nihilism: A Philosophy Based In Nothingness And Eternity in exchange for “some” of his recent works. He did not mention that he was sending a motherload.

The package split apart easily to reveal the three most recent Infamous releases in addition to a new release on S.A.’s label, Eremita Produzioni. This — naturally! — unleashed several days of furious listening, the results of which appear here.

Despite a few odd spoken word interludes and a somewhat underwhelming drum-based intro, this album explodes into solid music that uses a style which resembles a cross between old Ildjarn and the first Beherit album, but injects into it a melodic sense that is classically Southern European. The result achieves more of an intensity of energy and a savage warlike outlook than the darker melancholy and absolute isolation of Ildjarn, complemented by short bursts of melody which give context more than standing out themselves. The result portrays the sensations of a warrior in a wasteland, finding inspiration in memory and imagination more than the present. The hardcore influence and d-beat/RAC drumming infuses this with a violent strength.

Infamous adds longer melodies and narrative song constructions to the oi/black metal mix that Ildjarn pioneered, creating musical journeys that rage with internal conflict before exploding into sentimental melodies which enwrap previous riffs into a complete expression. Unlike their debut Of Suicide and Silence, Abisso holds back its full melodic development until the right moment, giving it greater gravity. Like all works from this band, this album is an immersion in a sonic wash from which moments of clarity emerge to unite its seemingly disparate parts. It shows the band slowly shaping an initial burst of nuanced creativity into a more focused force, creating a force multiplier for its effect on the listener.

This split combines two tracks each from three bands who approach the same style in distinctive ways adapted to their own expression. Infamous return to their earliest with more fully developed versions of techniques from its varied influences, crafting rhythmically powerful songs around melodies which stimulate the imagination through the emotions arising from the contrast between distinctive themes which converge into an atmospheric wash. This approach is more patient but owing to more aggressive instrumentalism, hits with an intensity that exceeds earlier works. These tracks achieve the kind of pace and mood that distinguished classic black metal and show a new power in this already-esteemed band. Solitudo approaches black metal with an almost contemporary feel but while retaining the power of older bands that wrote extended mid-paced compositions like Ancient and Merciless. Songs follow a verse chorus format with layers of keyboards and variation in guitar riff to create a slowly intensifying emotional state. The slight shoegaze influence has been twisted from minor key melancholy to stronger moods arising from chord progressions which emphasize even divisions between intervals, giving this a funereal aspect instead of mere individualistic melancholy. Warnungstraum approaches black metal with a high-intensity short melody riff-based attack similar to what Enslaved did on Frost, using tempo changes and riff development to further its power. Songs frequently vary between high-intensity verses and mid-tempo choruses, creating a mood of descent and return. Rare for a split album, these different styles within a sub-genre work together to make this a smooth journey from the intensity of Infamous to the more pensive Solitudo, ending in the searing attack of Warnungstraum.

Building on the more Ildjarn-esque Rovine e Disperazione, Infamous explores more of a classic Nordic black metal pathway here, retaining its idiosyncratic song structures and lengthy melodies, but expanding their development so that each piece comes to a raging conclusion in the midst of unabashedly emotional material. In particular, Tempesta appears to give nods to Gorgoroth and Ancient, building its songs from simple sawing riffs, then tucking in fragments of foreshadowed melody, before exploding into lengthier phrases that culminate in the type of melancholic and wistful melodies that have always been the hallmark of this band. Percussion has become more varied, mixing rhythmic textures to create a sense of shifting perspective, from which the melodies emerge like a dawn attack by mounted knights.