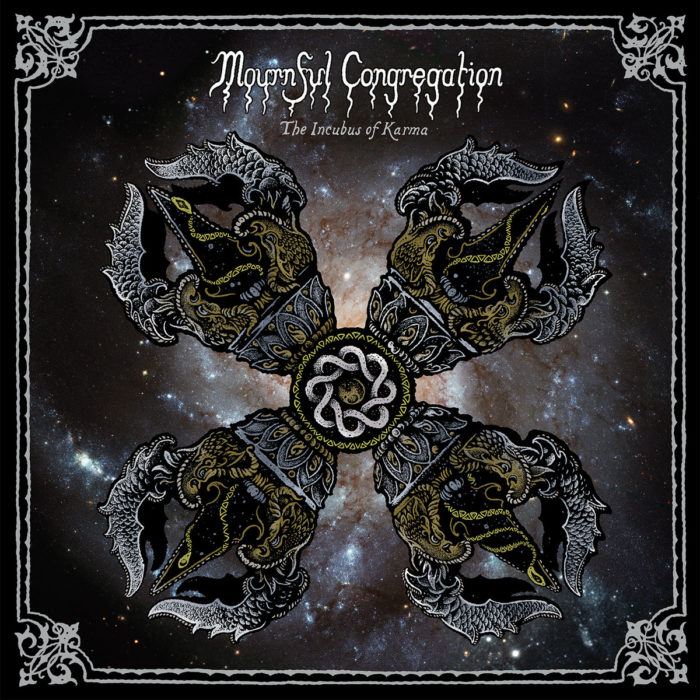 Australian funeral doom Mournful Congregation return with their latest offering after a four year hiatus.  Initially demonstrating a style in the vein of overly melancholic eurodoom bands, this four piece have slowly shedded the lugubrious sound of their former works in exchange for a more pensive and maximalist vision. Developing the ideas from their last full length The Book of Kings, Mournful Congregation create musically literate and complex songs that dance on the line between being nostalgic 70s rock and accessible funeral doom.

Loud thumping drums command attention, reverbating and loud without any of the clicking so common in these strange times.  The bass is deep and exists only to add depth to the strikes of the drums.  Guitars reminisce over a simpler time as they emulate the sound of forgotten guitar heroes. Vocals are the standard whispered growls we see in this micro genre that alternate ever so slightly in pitch and distortion, feeling at times more like spoken word than actual death metal vocals.  The all is drenched in a very convincing reverb that allows a greater dynamic range. Every note states its intent and then slowly decays until being silent.  A great example of using variations in volume to achieve a strong textural effect.

A rhythmically minimalist approach to their songwriting allows Mournful Congregation to superpose any number of elements on top of each other which they masterfully do as guitars harmonize in the style of My Dying Bride but with a wider palate that achieves incredible beauty within a specific moment.  The simplistic riffs are way too often cast aside as the lead guitars form micro songs within the compositions themselves.  Various instruments are expertly used in combination of the lead guitars but come across as being forced and do not communicate anything that the guitars did not.  The riffs bear no authority as the spotlight is uniquely taken by the lead guitars and one must pay particular care to try and discern the compositional structures.  Through repeated listens, the riffs maintain an atmosphere and guide us to various lead guitar gymnastics without any real direction and more often there is no progression to reflect the changes of a pensive mind.

Mournful Congregation have committed the cardinal sin of allowing the lead elements to dominate the music and thus sacrificing most of the power of their music.  By relegating the rhythm guitars to a tertiary role, there is barely any dirge left and what remains is a form of funeral doom that has been castrated of its power through obsession to show immediate beauty rather than hinting towards hidden beauty through the long song lengths and the lack of syncopation and rhythmic trickery.  The rhythm and lead elements do merge within a singular vision to give some passages a unique and strong take on doom but more often than not we remain with two sides at war, with one dominating the other.

There is so much to be salvaged from this album that avoids being a trainwreck due to the sheer strength of the guitars and the capabilities of the performers.  Another band falls to the traps of rock music through overt showmanship instead of persisting in what makes funeral doom such a great microgenre.  Many great artists allow themselves to be absorbed by the superficial notion of musical complexity and technique while forgetting what truly makes a composition great.  The Incubus of Karma is good for a late autumn stroll while caught in a dream like haze of one’s younger years, but like nostalgia itself is just a substitute for those too weak to deal with the reality of the present.

One thought on “Mournful Congregation: The Incubus of Karma ”