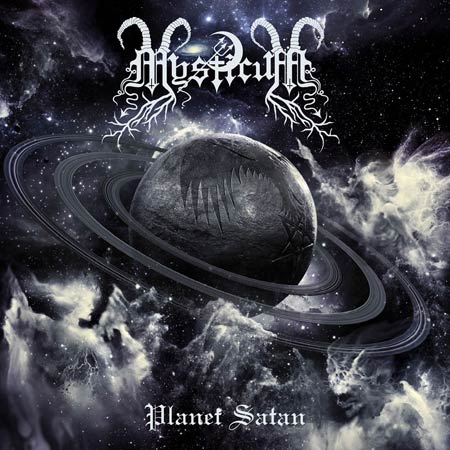 Furious blasts of minor chords form the entirety of the riffs present here. The electronic drums attract the most attention as they vary between traditional blast beats and aggressive electronic sounds. The drums using various samples as they follow the whims of the riffs. The central presence of the drum works well in entrancing the listener while keeping the guitars audible. Various industrial sounds enter during certain riffs before disappearing as soon as there is a riff change. They follow the drums as they intend on really pounding the basic pulse of the song into the listener head. At times some sounds appear without rhythm and try to distort the riffs through bips, sirens and video game like effects. The vocals function in three modes. The first being a deep rasp that tends to recount these tales of drug induced cosmic horrors. A much higher shriek that blends into this music and brings to life that the narrator feels in these frightening moments. On “Fist of Satan” a Hellhammer/Celtic Frost vocal almost soothes the listener as it opts for a much more psychedelic approach. Despite every element of this album being harsh in timbre, they all work together by imposing a trance like rhythm in the listener’s mind and as Burzum’s music sought to put the listener to sleep Mysticum seek to create the soundtrack to a trip gone horribly wrong.

The overly digital production is a great ally in this case as it caters for the seamless and fluid nature of each transition. The tempo changes are minor while sticking to tremolo picked riffs to make sure no sudden changes awaken the listener from the experience. The chords are played for at least a full bar if not more which makes riff changes less noticeable. Even during riff changes, the tonal center doesn’t tend to vary much and when it does it is usually by an octave or fifth as the consonance that sounds natural will not attract as much attention in comparison with a more dissonant movement. The riffs in themselves as much as they typical of the genre, are powerful through their long length which allows them to slowly crawl through the natural minor scale and then reach chromatic notes before returning to the root note showing a gradual descent into madness in a non lucid state.

The Black metal melodic narrative is completely fitting for the purposes of the album. The compositions start with an introductory set of melodies that then introduces the song’s main melody where the vocals enter before then exploring secondary ideas and then returning towards the main melody and from there the band will allow the vocals to introduce a pseudo-hook which consists of an incantation or combining the riffs with more prominent industrial effects that then pushes towards a stable conclusion where a different variation of the main melody that tends to forego some of the dissonant or chromatic intervals in favour of a completely resolved melody. While the overarching arrangements to every piece is similar, the journey within each of them is unique as Mysticum give the necessary room for their main melody to develop with the help of the drums and the various samples on top. The secondary ideas come in all forms and can sometimes be the focus of such songs while returning to the main melody to seal the trance.

Taking the riffs and arrangements of their more prominent peers to instill them into their own ideas has payed off tremendously for this band. While the nature of what this music seeks to convey does limit the band’s overall potency, the underlying concept is very well executed to its full potential. Though the title, aesthetics and relatively recent release date may be cause of concern on initial listens, this record reveals itself through repeated listens. While this is not a classic as it is held down by a lack of developed riffcraft and a willingness to place the trance above the actual compositions, it is still a great listen for those willing to test the horrors that an intoxicated mind can fathom.